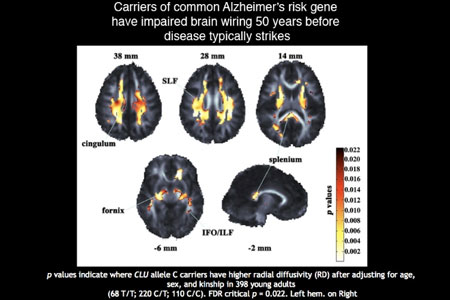 Scientists believe that there is a strong genetic component attached to Alzheimer’s coming in at a later stage of life. After the discovery of almost three risky genes, UCLA investigators now believe that the CLU risk gene begins to damage the brain a full 50 years before people normally get Alzheimer’s. According to a report submitted by the team, 88% of Caucasians possess the C-allele of the CLU gene that disturbs the development of myelin, making it weaker and more vulnerable to the onset of Alzheimer’s much later in life.

After scanning the brains of around 398 healthy adults in the age group 20 to 30 using a high-magnetic-field diffusion scan (called a 4-Tesla DTI), various comparisons were drawn between those who possessed the C-allele variant of the CLU gene with those who had a different variant, the CLU T-allele.

They found that the CLU-C carriers had lower ‘fractional anisotropy’ called so by brain imaging investigators which is nothing but a widely accepted measure of white-matter integrity. It is known to be present in multiple brain regions including many areas that are known to degenerate in Alzheimer’s. It was thus uncovered that young healthy carriers of CLU -C risk variant were at a higher risk of developing Alzheimer’s later in life as they showed a distinct profile of lower white matter integrity.

As Paul Thompson, senior author of study shares with us some interesting aspects of what this gene does on several levels he says, “ For example, Alzheimer’s has traditionally been considered a disease marked by neuronal cell loss and widespread gray-matter atrophy,” he said. “But degeneration of myelin in white-matter fiber pathways is more and more being considered a key disease component and another possible pathway to the disease, and this discovery support that.”

Thompson found out four surprising things with the discovery of this gene’s function. Prior to people developing Alzheimer’s this risk gene affects the brain before a brief 50 years time. There are no symptoms but the effect can be seen on an MRI scan. This mysterious gene is now known to impair the brain wiring exposing it to attack before the development of any senile plaques and tangles.

He further added, “Rather than being a gene that few people have, a whopping 88 percent of Caucasians have it.”So I guess you could say the other 12 percent have an ‘Alzheimer’s resistance gene’ that protects their brain wiring.”

Finally, he explained that being aware of the role of this gene would be helpful in predicting the risk factor involved with a person contracting the disease and it also helps us take the appropriate steps to protect the brain in the 50 years time window that we have in front of us before the disease is fully developed.

Why is Alzeheimer’s not so frequent among the youth? Less myelination in CLU-C carriers may not translate into poorer cognition in youth, Thomson explained, because the brain can compensate. The brain features vast connections and is also integrated with redundancy. Nevertheless, the coalition of other factors like normal neuron death because of aging and development of plagues and tangles in the initial stages may possibly lower the myelin integrity, consequently facilitating cognitive impairment.

“So it’s unlikely we are seeing the earliest possible signs of Alzheimer’s-associated brain changes in these young people,” Thompson specified. “It’s more likely the reduced fiber integrity represents an early developmental vulnerability that may reduce brain resilience to later Alzheimer’s disease pathology. In other words, its mechanism of action may not be part of the classic Alzheimer’s pathways that lead to abnormal amyloid plaque and neurofibrillary tangle accumulation in the brain.”

The mapping of structural brain differences in those at genetic risk for Alzheimer’s disease is crucial for evaluating treatment and prevention strategies. Thompson further stated that these brain differences once identified can be monitored to consider other factors like lifestyle choices influencing brain health and disease risk.

This study thus plays an important role in getting acquainted with the history of Alzheimer’s and how it affects people in the long span of life. The study has been currently published in the online edition of the Journal of Neuroscience.