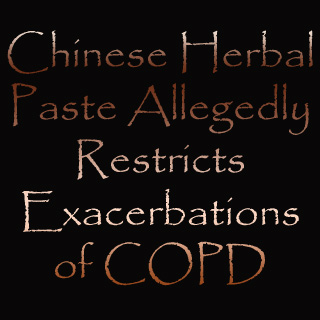 The traditional Chinese herbal paste Xiao Chuan or XCP has been used for centuries to treat breathing difficulties, COPD and asthma. The herbal paste may have great significance for COPD patients. According to a team of experts, XCP can prevent exacerbations of COPD.

This herbal paste has to be probably applied in the summer season on specific acupuncture points on the back. It allegedly contains some immune regulation properties, which aid in restricting COPD exacerbations. The efficacy of this paste was tested on 142 patients randomly subjected to XCP or a placebo paste. Both pastes were applied on the same back points four times in the eight-week period of July and August.

In this investigation, exacerbations have been defined as either a worsening of respiratory symptoms resulting in the patient taking oral steroids or antibiotics. They were also related to a hospital admission for an acute respiratory complaint. The study subjects were thoroughly inspected for exacerbations from November through February. All the adverse events arising throughout the study were examined through the Chinese Herb Skin Stimulation Classification.

The incidence of adverse events was reported by 2 percent of the treatment group. All patients who experienced an adverse event supposedly recovered without intervention after stopping the medication. However, no adverse events appeared in placebo group. The study findings may help in standardizing the treatment protocol and avoid adverse events in future clinical practice. XCP is primarily made up of Ephedra vulgaris, Asarum heterothropoides and Acorus gramineus Soland, all plants which are native to China.

The study results will be presented at the ATS 2011 International Conference in Denver.