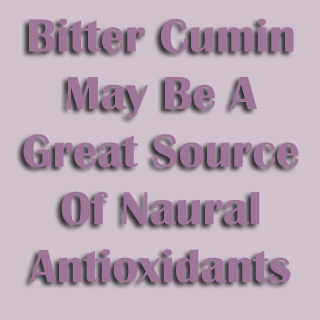 Bitter cumin’s role as a traditional medicine in tackling a range of diseases from vitiligo to hyperglycemia is possibly known to man. Well, it may be also considered as an antiparasitic and antimicrobial that reduces fever and acts as a painkiller. Now, a recent research suggests that bitter cumin contains high levels of antioxidants.

The research was conducted on the seeds of this spice that were extracted with a combination of acetone, methanol and water. The antioxidant activity of bitter cumin extracts were then characterized in various in vitro model systems including DPPH radical, ABTS radical scavenging, reducing power, oxidation of liposomes and oxidative damage to DNA. While examining the phenolic extracts of bitter cumin at microgram concentration, it appeared that phenolic acid content is directly associated with antioxidant activity.

Antioxidants are beneficial for humans probably because they mop up free radicals, reduce oxidative stress and prevent disease. In conclusion, scientists shared that bitter cumin extracts are strong antioxidants and protect against DNA damage. The research findings seem to have great significance in the health domain.

The research is published in the open access journal BMC Complementary and Alternative Medicine.