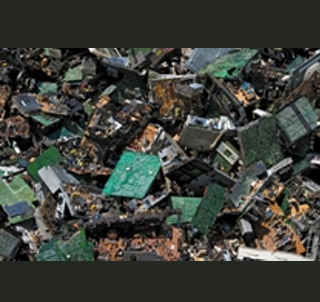 Every year 20–50 million tons of e-waste or electronic waste is possibly generated worldwide. This form of pollution may not only hamper the environment, but also implicate human health. In an astonishing discovery, scientists found that e-waste has a significant impact on human lung epithelial cells. It may also act as a precursor to cardiovascular disease, DNA damage and cancer.

Cultured lung cells were first exposed to the organic-soluble and water-soluble constituents of the samples. Then the cells were tested for level of Interleukin-8 (IL-8), a probable key mediator of inflammatory response and Reactive Oxygen Species (ROS). Scientists also tested the samples for the expression of the p53 gene. This tumor suppressor gene is believed to generate a protein for counteracting cell damage. It was suggested that the samples of pollutants caused significant increases in IL-8 and ROS levels. Both IL-8 and ROS levels are apparent indicators of an inflammatory response and oxidative stress, respectively.

“From these results it is clear that the ‘open’ dismantlement of e-waste must be forbidden with more primitive techniques improved. As the results show potential adverse effects on human health, workers at these sites must also be given proper protection,” added Dr Fangxing Yang, of Zhejiang University. “Furthermore, one must consider the initial manufacturing process of electrical goods and look to utilise more environmentally and human friendly materials in their production.”

During the investigation, samples were taken from the air of the Taizhou of Zhejiang province. This site appears as a dismantling complex that involves more than 60,000 people and dismantles more than two million tons of e-waste to recycle metals each year. For obtaining the samples, experts had to use two sampling sites that were located downwind of a dismantling industrial park in Taizhou. On completion of the research, no remarkable association between IL-8 and ROS and p53 expression was registered. However, it was affirmed that the link may have not been observed due to the various other endpoints which were not examined.