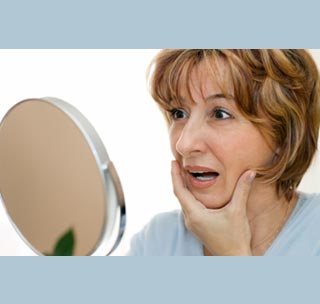 Wrinkles are not only a sign of aging, but also seem to reveal bone health. According to Yale School of Medicine experts, wrinkles can foretell a woman’s bone fracture risk. They also mention that the severity and distribution of skin wrinkles and overall skin quality may help deduce the bone mineral density in early menopausal women.

As a part of the study, scientists examined a subgroup of early menopausal women within three years of their last menstrual period. All the participants were enrolled in the ongoing clinical trial, the Kronos Early Estrogen Prevention Study (KEEPS). Authors assayed skin wrinkles at 11 locations on the face and neck using a pictoral scale in 114 of the KEEPS enrollees. Also skin rigidity at the forehead and the cheek was analyzed with the help of a device named the durometer. For studying skeletal mass and density, a portable heel ultrasound device and dual X-ray absorptiometery was employed.

“We found that deepening and worsening skin wrinkles are related to lower bone density among the study participants. The worse the wrinkles, the lesser the bone density, and this relationship was independent of age or of factors known to influence bone mass,” shared Lubna Pal, associate professor in the Department of Obstetrics, Gynecology & Reproductive Science at Yale School of Medicine.

On completion of the study, it was asserted that both skin and bones have common building blocks-proteins. It was also revealed that aging may be accompanied by changes in skin and deterioration of bone quantity as well as quality. The study findings claim that the appearance and physical properties of the skin can reflect the quality of the skeleton and can aid in identifying postmenopausal women at fracture risk.

The study was presented on June 6 at the Endocrine Society Meeting in Boston, Mass.