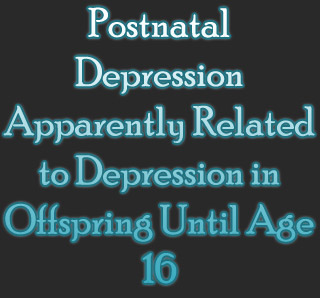 A form of clinical depression, postnatal depression has a number of health implications. On the brighter side, it is taken care of more often than not within weeks following childbirth. There are however numerous mothers who could be facing more profound or prolonged postnatal depression. The consequent development of depression in children from such mothers has now been unearthed by a latest study.

The study is said to be the first of its kind to show the effects of maternal depression on children. The latter seemed to have higher chances of suffering from depression with the condition taking on as early as infancy. The investigation included a report on about 100 mothers in age groups between 18 and 42 years. Among these women approximately 58 faced postpartum depression. The likelihood of their children over a 16 year time period to developing depression was analyzed.

The included women were first time mothers and were identified for depression at 2 months postpartum. They were evaluated with a group of non-depressed women and their children at 18 months, and 5, 8, 13, and 16 years of age. The SPI at recruitment method, the Schedule for Affective Disorder and Schizophrenia, and the Structured Clinical Interview for DSM-IV wer used to assess their depression. The study was conducted by Lynne Murray and her British colleagues.

These women were also investigated for marital conflict and infant attachment at 18 months using Ainsworth’s Strange Situation Procedure. The children were then rated at 5 and 8 years on emotional and behavioral responses so that their ego flexibility could be measured. Diagnostic interviews using the Kiddie Schedule for Affective Disorders and Schizophrenia, Present and Lifetime Version (KSADs) followed next when the children were 16 years of age.

The analysis led Murray and colleagues to the discovery that children of mothers postnatally depressed were at a significantly higher risk for depression. The rate of depression for children by the time they were 16 was apparently over 40 % and the average age of the first onset of depression was when the kids were 14 years. The study captivates attention with the investigators revealing the possibility of an associated impairment of the children’s attachment to their mother during infancy a few years before the beginning of depression.

Furthermore, lower child ego resilience ascertained at 5 and 8 years of age was linked to a higher depression risk. Offspring lifetime depression was seen to be largely associated with maternal depression and marital conflict, stretching past the postnatal duration.

In conclusion, the scientists suggest that the significantly increased risk for depression among children of mothers suffering from postnatal depression emphasizes on the importance of screening them for PND. It also underlies the need of early interventions.

The May 2011 issue of the Journal of the American Academy of Child and Adolescent Psychiatry features these findings.