Obesity simply put, is the accumulation of excess body fat to the extent that it may have an adverse effect on health, leading to reduced life span or increased health problems. But first and foremost the basic question that arises is, How is it determined if a person is Obese or not? This is done by something called as BMI (Body Mass Index). It basically defines the ratio between the height and weight of a person. If the BMI is between 25 and 30 kg/m2, the individual is termed as pre-obese or overweight. If the BMI exceeds 30 kg/m2 the individual is termed as obese. 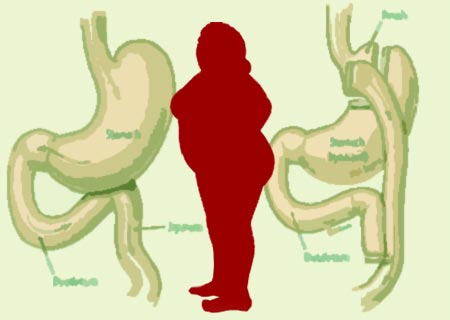 Obesity is often a culmination of various factors, ranging from Genetic to Behavioral. There are a range of factors that result in a person becoming obese or over weight. Some of the causes of obesity include:

Overeating – Overeating invariably leads to weight gain, more so if the diet is full of fat rich food. Foods like fried food and sweets that have a higher amount of calorie in smaller quantity of food are even more potent culprits behind obese individuals. This is due to their high fat and sugar content. Various epidemiological studies have shown that diets rich in fat add to weight gain.

Frequency of eating – There is no direct evidence linking the number of times food is consumed to obesity. Many reports show overweight people eating actually less often than people with a normal weight! Scientists have observed in various studies that those people who eat small meals 4-5 times each day tend to have lower levels of cholesterol s and lower and/or more stable blood glucose levels than those who eat less frequently (2-3 large meals daily). One of the possible justifications is that small but frequent meals lead to stable insulin levels, while large but few meals result in large spikes of insulin afterwards.

Physical inactivity – People having sedentary jobs obviously burn fewer calories than their active counterparts. A survey done by The National Health and Nutrition Examination (NHANES) had concluded that weight gain had strong co-relation with lack of physical activity in both genders.

The other major causes of Obesity are Pathological factors- diseases such as hypothyroidism, polycystic ovary syndrome (PCOD) and Cushing’s syndrome, Genetics, and psychological disorders like depression etc. which need appropriate medical attention from specialists.

Obese people are at a risk of a number of chronic diseases. The effects of obesity include:

Type 2 diabetes – This type of diabetes is normally associated with a person whose body is shaped like an apple or who has central obesity in medical terms. It basically means the person has more fat deposits around his/her waist as compared to rest of the body which might actually even be in shape.

Heart attack – A prospective study had proved that obese people are at a higher risk of developing coronary heart disease (CHD) as compared to normal individuals. The risk increased 3 to 4 times in people having a BMI of 29 and above.

Insulin Resistance – Insulin is the hormone responsible for carrying blood glucose (sugar) into the cells of muscle and fat which is then used for energy either immediately or stored as fat for future use. It helps in keeping the blood sugar levels within the normal range. Insulin Resistance (IR) is a condition wherein the effectiveness of insulin in glucose transportation into cells is considerably reduced due to a resistance of its receptors. Fat cells found in obese people or overweight people are more resistant to insulin as compared to muscle cells. Hence, a major cause of insulin resistance is obesity itself. To counter this resistance, the pancreas responds by releasing an excess amount of insulin so that the glucose levels are maintained within the normal range. The glucose levels are maintained only till the pancreas produce insulin. Once the pancreas cannot keep up, the blood sugar level in the body increases leading to Type-2 diabetes.

The burning question that arises after keeping in mind all the above ill-effects of obesity is – How can Obesity be controlled or reduced? Are there any treatments for obesity? Bariatric surgery also known as Weight Loss Surgery is performed on individuals having BMI above 40. The size of the stomach is reduced by implanting a medical device or a portion of stomach is removed or the small intestine is re-routed to a small pouch. There are two main types of bariatric surgery, adjustable gastric banding and gastric bypass.

Laparoscopic adjustable gastric banding: A ring is placed around the stomach’s upper part. The band-like ring incorporates a balloon that can be adjusted to the size of the ring so that food intake can be regulated.

Sleeve gastrectomy: Majority of the stomach is taken out, leaving behind only a sleeve-shaped piece of stomach making it irreversible.

Bilio-pancreatic diversion: This is an extensive form of the gastric bypass surgery where the gastric pouch is joined to the terminal part of small intestine producing greater nutritional deficiency. It is sometimes performed along with something called as a duodenal switch. This severely limits caloric assimilation and absorption.

Gastric stimulation: It employs an implanted device like a pacemaker to give recurrent electrical stimulation to stomach.

Intra-gastric ballooning: It is more of an endoscopic procedure that entails placement of a silicone balloon in the stomach to produce a false feeling of fullness and satiety. Efficacy is doubtful.

Obesity as mentioned before is preventable. At an individual level, obesity can be controlled by following a healthy lifestyle, limiting consumption of total fats, by indulging in physical activities and regularly consuming fresh fruits, vegetables, legumes and whole grains. Apart from these there are responsibilities at the societal level too which include making healthier dietary patterns affordable and available. Obesity today is a leading cause of death worldwide, a cause which can be prevented by spreading awareness and being alert at the individual, society and global level.