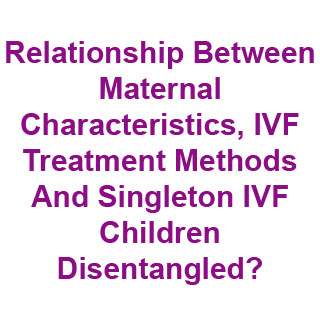 A new study has put forth the impact of the mother’s characteristics on the development of her child after in vitro fertilisation (IVF). The study was conducted on 8,941 IVF children born between 2002 and 2006 in Sweden. It was discovered that smoking, maternal infertility, maternal age, primiparity (first birth) and body mass index (BMI), both over and underweight, were linked with an adverse perinatal outcome.

IVF children comprise three percent of all newborns in Sweden and about forty thousand children have been born after IVF. Seventy percent of all of the country’s 13 000 per year IVF cycles since 2004, have been single embryo transfer (SET). A constant live birth rate and a decrease in the multiple birth rate from 25% to 5% have been the outcomes of employing the SET policy.

Dr. Antonina Sazonova, from Sahlgrenska University Hospital, Gothenburg, Sweden, who carried out the analysis with colleagues from the hospital and from Lund University stated, “This represents a large number of children and any adverse outcomes related to IVF are therefore a major public health issue. New methods and more advanced techniques are being developed all the time, and safety and quality aspects have, rightly, been of great interest during the past few years. We particularly wanted to know whether the number of embryos transferred influenced obstetric outcomes.”

Investigation from the same group previously had shown that singletons in the general population, had a richer obstetric outcome than singletons as a collection, regardless of the number of embryos transferred. Thus the scientists planned to check into predictors for an unfavorable outcome in singletons from IVF/ICSI.

“Besides the known predictors of particular maternal characteristics, we also included details of IVF techniques such as the number of oocytes retrieved, and differences in embryo culture and preservation. We wanted to find whether there was any independent association with the four outcomes – preterm birth, small for gestational age, placenta previa, where the placenta grows in the lowest part of the uterus and covers the cervix, and placental abruption, where the placental lining separates from the uterus,” elaborated Dr. Sazonova.

This study discovered that maternal smoking, BMI, primiparity and the vanishing twin syndrome, wherein a foetus dies in the uterus and is reabsorbed by the mother or the other twin, were all linked to a risk of pre-term birth (before 32 weeks gestation). They were also associated with an increased risk for gestational age (SGA), but there wasn’t any relation found with the number of embryos transferred. Blastocyst transfer (using five or six day embryos) and maternal age were associated with an increased risk of placenta previa, while primiparity was linked with a decreased risk. Smoking was discovered to be the only factor of importance associated with placental abruption.

“The finding of a positive association between blastocyst transfer and placenta previa is new and has not been described before. At a time when blastocyst transfer is increasingly used as a way of improving the chances of pregnancy, it is important that we should investigate this further. We also intend to look at differences in obstetric outcomes between singletons born from frozen/thawed cycles and compare them with singletons from fresh cycles and in the general population.” stated Dr. Sazonova.

According to the scientists, a better result for singletons post SET would increase the pressure on most IVF centres globally to introduce SET as their cardinal IVF transfer strategy.

This report was presented at the annual conference of the European Society of Human Fertilisation and Embryology.

Over-seeing satiety cues in infants may lead to obesity