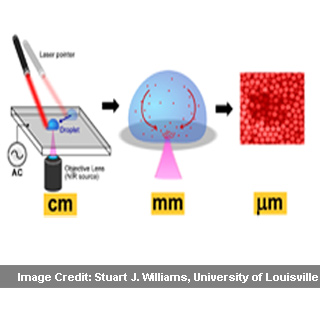 A recent wave of technology showed us how it could lessen scarring in kidney surgeries. Now, a study conducted by Purdue University scientists has put forth a new technology which will supposedly combine the effect of laser and electric fields to regulate fluids and tiny particles such as bacteria, viruses and DNA for varied utilities like production of drugs and ensuring safety for foodstuffs.

The technology seeks to bring some novelty into sensors and devices for lab-on-a-chip functionalities. It is touted to introduce minute tools that will apparently perform calculation and measurement which otherwise need bulky devices. This technique known as hybrid optoelectric manipulation in microfluidics, appears to be a potent mechanism for different purposes like diagnosis of diseases, food and water trials, forensic examination of criminal incidences and pharmacy.

“This is a cutting-edge technology that has developed over the last decade from research at a handful of universities. A very important aspect is that we have achieved an integration of technologies that enables manipulation across a very wide length scale spectrum. This enables us to manipulate not only big-sized objects like droplets but also tiny DNA molecules inside droplets by using one combined technique. This can greatly enhance efficiency of lab-on-a-chip sensors,” commented Aloke Kumar, a Wigner Fellow and staff member at Oak Ridge National Laboratory.

According to scientists, there are two main processes in its applications. They are namely the micro and nanomanufacturing thrusts as well as lab-on-a-chip sensors. The latter has been put to use in a wide variety of functions over recent years and its expansion is apparently a continuing process. The system is put to start by using a red laser to locate a droplet on a platform that is specifically crafted at the University.

Further, an infrared laser is objectively utilized to heat the droplets. The electric field thus produced causes the hot liquid to move around in a microfluidic vortex. The latter is used to filter particular types of particulate matter that is present in the circulating fluid similar to a micro centrifuge. The size, location and shape of the infrared laser pattern are identical to the matter.

The process is seemingly quick as it takes less than a second for particles to settle down and filter out. Instruments that take advantage of the hybrid optoelectric approach may be sketched to closely identify, control and display specific kinds of bacteria including certain strains which cause heavy metals to become less poisonous.

Biological applications such as groundwater remediation are being explored. Depending on the type of bacteria, the technology presumably separates out the inefficient ones. Its usage in pharmacy which involves filtering out solid particles out of a liquid is also being carried out. Apparently, the technology gives a chance to decide which particles are to be removed and which ought to be kept intact, unlike a centrifuge.

The nanomanufacturing procedures may take 5 more years to get into effect which requires gatherings of suspended particles, known as colloids. Colloids are supposedly used to manufacture tiny devices by constructing various objects out of it. Scientists claim that that the technology can also be used to acquire basic electrokinetic forces of molecule and biological constructs, which doesn’t seem to be possible with the current systems.

The findings appear in the July7 issue of Lab on a Chip magazine.