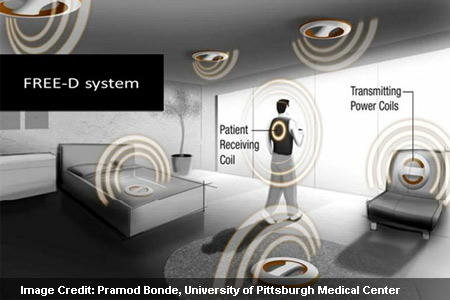 Researchers at the University of Washington and the University of Pittsburgh Medical Center reveal the testing of a wireless power system for patients with an implanted heart pump. The improvement of technology has seen the introduction of ventricular assist devices in patients with a failing heart. However the power cord of these devices is prone to infection and their prolonged use may hence come with their own set of problems. And this precisely where this new finding comes into the picture.

A variation on inductive power, the concept similarly includes a transmitting coil that gives out electromagnetic waves at a specific frequency. A receiving coil then soaks up the energy, employing it to charge a battery. For the past six years, Joshua Smith, a UW associate professor of computer science and electrical engineering, having recently shifted to the UW from Intel Research Seattle, reveals to have been working on wireless power.

Together with his colleagues at UW and Intel, Smith drafted an inductive system having the ability to adjust the frequency and other parameters. This included distance or orientation between the transmitter and receiver, making for a more efficient and flexible wireless power system. Something the researcher calls as ‘magic regime’, allows power to remain constant across distances which are identical to the coil’s diameter. While it doesn’t seem like a lot of distance, it is said to be enough to link the skin and tissue so that it reaches a medical implant.

“My primary interest is to help heart failure patients recover, and they can only recover if they are not tethered to a battery or external power supply so they can exercise and train their heart to recover,” says Dr. Pramod Bonde, a heart surgeon at the University of Pittsburgh Medical Center. “With wireless technology patients can be free and they can have a chance to move around and exercise like normal human beings.”

The use of the wireless system, translates to the elimination of a troublesome power cord, pushing via the skin. This would thus lower the possibilities of an infection. The researchers conceive a vest capable of holding an external transmitter coil hooked to a power cord or battery. It would involve the inclusion of a tiny receiver coil implanted under the patient’s skin connected to a battery juiced up to serve for approximately two hours. Presently heart pump users aren’t free for even short periods and this new system hopes to help do just the opposite. So, the patient can be free to take a bath or say a swim.

For long term use, the researchers visualize added power transmitters housed below a patient’s bed or chair, enabling them to work or exercise without any worries. The presented results reveal a system that may power a commercial heart pump working underwater with a receiving coil. The latter could have diminutive dimensions of 1.7” across. With an efficiency of about 80 percent, power was reportedly transmitted reliably. The next step is the testing of the system together with a heart pump implanted in an animal.

The work was presented in Washington, D.C. at the American Society for Artificial Internal Organs annual meeting.