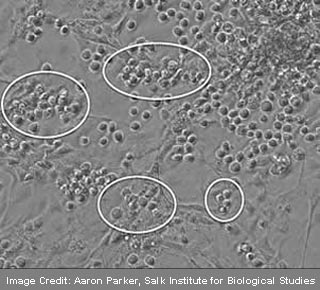 The technique of inducing simple skin cells to become stem cells has been rolling over the minds of scientists since 2006. Now, a team of researchers from the Salk Institute for Biological Studies has seemingly developed an enhanced method that generates large numbers of blood cells using a patient’s own cells. This methodology may enlighten further stem cell studies which could be put to use for treatment of varied disorders.

Back in 2006, the techniques for transforming ordinary skin cells into induced pluripotential stem cells (iPSCs) were first reported. iPSCs supposedly copy the embryonic stem cells (ESCs) from which organisms grow. Scientists now wish to decipher the proportion of mixes and series of chemical compounds that force the iPSCs to grow as tissue-specific stem cells that they require. They are supposedly self-generating and produce ‘progenitor’ cells when they are transplanted into the body. These cells seem to undergo local multiplication and result in the formation of mature tissue cells.

“There are further improvements that we need to make, but this takes us a significant step closer to the ultimate goal, which is to be able to take ordinary cells from a patient, induce them to become stem cells, and then use those stem cells to rebuild lost or diseased tissues, for example the patient’s bone marrow,” remarked Inder M. Verma, PhD, Irwin and Joan Jacobs Chair in Exemplary Life Science and American Cancer Society Professor of Molecular Biology at the Salk Institute Laboratory of Genetics.

Many ongoing researches have been trying to locate more effective techniques to convert iPSCs into blood-forming ‘hematopoietic’ stem cells (HSCs). The latter are specifically essential because they provide the immune system with white blood cells along with the red counterparts. The present research sought to mimic the altering states that automatically direct ESCs to turn into HSCs in the womb. The researchers took 7 lines of human ESCs and iPSCs, and conducted trials using various combinations and sequences of growth variables along with other chemical compounds that are presumed to be present during the transformation of ESCs to the HSC state.

By appropriate mixing of these factors, the investigators caused the iPSCs and ESCs to seemingly form teams of cells that possessed the distinct molecular markers of blood cells. One such efficient combination resulted in the apparent detection of blood-specific markers on 84% of the cells after a period of 3 weeks. According to the analysts, the progenitor cells were identified from myeloid cells and not lymphoid cells. Also, the blood cells created from ESCs and iPSCs comprised of temporary progenitors and mature blood cells but were devoid of unlimited self-generating transplantable HSCs. The mixture seemed to accelerate the conversion of cells from the HSC state to the progenitor state or appeared to abandon the HSC state totally.

The scientists reached a hypothesis that an intermediate, pre-hematopoietic kind of stem cell probably existed that were apparently produced by ESCs as well as iPSCs and which as a result created HSCs. According to Parker, HSCs seem to be present in a specific portion of mammals during the stage of embryonic development. He further states that the pre-hematopoietic stem cells exist there and are induced to mature into HSCs. Therefore the researchers now aim on locating the close developmental signs that the embryonic region provides to produce these real and transplantable HSCs. The next step would be to ensure and enhance the safety of HSCs that are made for human patients.

The research is published in the July edition of the journal Stem Cell.