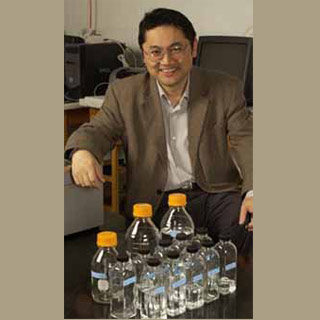 Most people might be aware of only the superficial symptoms of sunburn, but the real truth looks bitter. The latter is most likely to cause cancers and other skin infections too. Ohio State University researchers have finally been able to comprehend the procedure by which an enzyme resurrects sun-impaired DNA. They found that the process is paradoxical to basic stances of the technique biological mechanisms exploit to restore sunburn. This awareness may pave way to development of medicines and lotions to effectively treat sunburn.

The researchers were aware of the natural enzyme photolyase that is present in the cells of plants and humans. The enzyme apparently corrects DNA by entering the harmed portion in two regions and reorganizing it to its normal and suitable structure. However, it does not tear open both the injured places at once. It is supposedly a two-step procedure where it transfers an electron though the molecule in an oblique pathway from one affected position to another.

The team gained its understanding by using laser with a type of strobe influence to take quick measurements of the active enzyme. They were surprised at the speed with which the 2 chemical bond sites broke one after the other. The first one seemingly cracked in almost a few trillionths of a second while the second one broke following a 90-trillionths-of-a-second delay.

They were confused with the reason of such an occurrence. The individual electrons released from the enzyme supposedly consumed time and effort to transit from one bond spot to another. It glided along the outer boundary of the ring-shaped deteriorated portion. The researchers explained that this route opted by the electron is the most promising way for it to implement its job.

“The enzyme needs to inject an electron into damaged DNA — but how? There are two pathways. One is direct jump from the enzyme across the ring from one side to the other, which is a short distance. But instead the electron takes the scenic route. We found that along the way, there is another molecule that acts as a bridge to speed the electron flow, and in this way, the long route actually takes less time,” explained Dongping Zhong, the Robert Smith Professor of Physics and professor in the departments of chemistry and biochemistry at Ohio State.

Ultraviolet (UV) light damages DNA leading to a molecular injury called dimer. These dimers cause genetic mutations that result in conditions such as cancer. The latter is known as cyclobutane pyrimidine dimer, and it appears like a ring-shaped structure that projects from the side of the DNA. In organisms that possess the photolyase in their cells, the enzyme takes in energy from blue light to throw an electron into the cyclobutane ring to ensure its breakage. The effect of this process shows in the form of an accurately repaired DNA strand. This is precisely the reason why most insects that carry photolyase are shielded from cancer causing UV rays of the sun. Contrarily, humans and mammals are devoid of this enzyme and are therefore gullible to UV rays. A man-made replica of photolyase could manage the less availability of this enzyme.

The research is reported in the Proceedings of the National Academy of Sciences.

Obese and Weight-related Diabetic children may have to undergo gastric band...