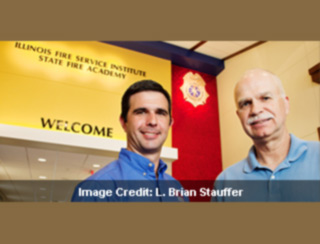 Firefighters who save so many lives each year may face certain other health problems apart from the ongoing hazards. According to two studies conducted by the Illinois Fire Service Institute, located at the University of Illinois, firefighters may have hardened arteries and a worn out heart.

It was revealed that 3 hours of firefighting activity apparently causes acute rise in arterial stiffness and harms cardiac functioning in young, and even healthy male firefighters. The study constituted nearly 69 firefighters in the age-group 19 to 48 with a median age of 29. They were in active service and medically fit to engage in live-fire activities. However, some of them were overweight as per BMI.

“These changes appear to be similar to what is observed after maximal aerobic and/or heavy resistance exercise and are likely due to a combination of thermal, metabolic, and psychological stresses that occur during fire-suppression activities. It was a representative cross-section of the firefighters who would be in the line doing the firefighting activities, although relatively young,” cited Gavin Horn, the director of research at IFSI, and Bo Fernhall, a professor in the department of kinesiology and community health in the U. of I. College of Applied Health Sciences.

Sporting the firefighting gear, the participants underwent usual fire suppression activities such as advancing hose, breaking doors open, extinguishing a fire as per the institute’s training facility. There were 4 to 5 activity phases for duration of 15 to 25 minutes each. There were many 10-15 minute rest periods allotted for them to refresh and energize themselves.

Just before and after an episode of fighting, the scientists calculated various cardiovascular functions, inclusive of heart rate; brachial, carotid and aortic blood pressures. They measured the blood flow in their forearms as well as arterial stiffness and thickness too. Their body temperatures were also noted with the help of a monitor and a disposable tiny sensor capsule that they consumed the night prior to the trial.

Around 1 hour before the data was gathered, the enrolled persons received a uniform meal and a 2-gram Vitamin C capsule or a placebo. As per the result of the study, Vitamin C supplementations did not influence any of the findings. It was also revealed that their arteries appeared stiff after firefighting. There were no signs of inflammation or blood pressure though. Notably, the participants’ endothelial function was seemingly enhanced. However, if this would subsequently cause heart attack or stroke is not yet clear. This condition also applies to weightlifters and endurance athletes.

The study is published in the journal Vascular Medicine.