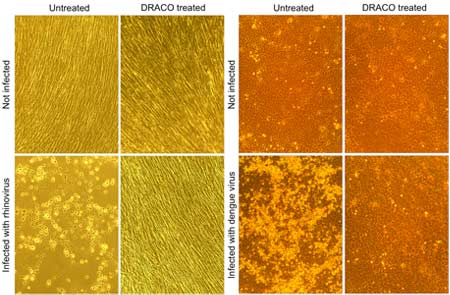 Alexander Fleming gave us penicillin for combating bacterial infections. However, a solution for viral attacks that wreak havoc in our lives every now and then is yet to arrive. Now, in a major breakthrough, a research team from MIT’s Lincoln Laboratory has formulated a medicine that can apparently recognize and kill cells that have any type of viral infection.

The clan tested the efficiency of the drug for 15 viruses inclusive of common cold, H1N1 influenza, stomach virus, polio virus, dengue fever and many other types of hemorrhagic fever. Surprisingly, the medication seemed to work for all of them. The mechanism of the aforesaid drug is such that it targets a type of RNA created only in cells that encounter virus attacks.

“In theory, it should work against all viruses. Because the technology is so broad-spectrum, it could potentially also be used to combat outbreaks of new viruses, such as the 2003 SARS (severe acute respiratory syndrome) outbreak. If you detect a pathogenic bacterium in the environment, there is probably an antibiotic that could be used to treat someone exposed to that, but I realized there are very few treatments out there for viruses,” commented Todd Rider, a senior staff scientist in Lincoln Laboratory’s Chemical, Biological, and Nanoscale Technologies Group who invented the new technology.

Presently, there are just a cluster of drugs available for viral infections such as protease inhibitors that are used to regulate HIV infection. However, these are very few in number and are prone to viral resistance. Rider referred to living cells’ own defense system to comprehend his therapeutic agents namely dubbed Double-stranded RNA Activated Caspase Oligomerizers (DRACOs). When a virus afflicts a cell, it exploits the cell machinery for its own advantage. It strives to replicate itself and creates long threads of double-stranded RNA (dsRNA), which seemingly does not exist in human or animal cells.

The natural bodily defenses that work against the virus have certain proteins that attach onto dsRNA, which starts off a sequence of reactions that seek to prohibit the virus from making copies of it. But, many viruses trick the system by creating a barrier for one step below the cascade. Rider planned to strike a combo of dsRNA-binding protein with another protein that instigates cells to face apoptosis or programmed cell suicide. In simple words it means when a cell is on the verge of becoming cancerous, one end of the DRACO associates to dsRNA, and beckons the other end to invoke cell suicide.

This avenue that adds up the 2 elements is new and seems to be a good method, according to researchers. Karla Kirkegaard professor at Stanford University, shares that viruses are considerably good at developing resistance for substances deployed against them. Nevertheless, in this technique, drug resistance looks like a remote possibility. Every DRACO is inclusive of a delivery tag that is attained from naturally occurring proteins which enables it to surpass cell membranes and gain entry into any human or animal cell. In cases where no dsRNA exists, DRACO leaves the cell untouched.

Majority of the trial in the above study were done using animal and human cells. DRACO was also tested in mice that had H1N1 influenza virus infection. Treatment of mice with DRACO supposedly treated them entirely. The tests also affirm that these compounds are not poisonous for mice. Researchers are now conducting trials to see if DRACO works against more viruses, Rider is anticipating the tech to be used in larger animals and eventually in humans too.

The research is published in the July 27 issue of the journal PLoS One.