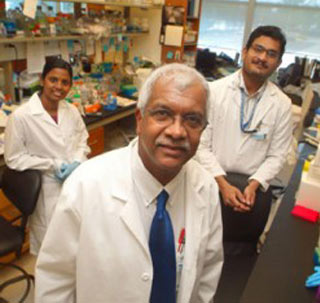 Commonly, breast cancer cells appear to utilize the strongest and most efficient food delivery mechanism in human cells. Creating a barrier for this system will apparently kill the cells. According to the Georgia Health Sciences University researchers, this technique of starving cancer cells may pave way for new options to be used in patients showing resistance to usual therapies like tamoxifen.

Human estrogen receptor-positive breast cancer cells living in a Petri dish or implanted onto mice supposedly die when they face exposure to a drug that impedes the carrier, called SLC6A14. The latter is the only one transporter that apparently carries all 10 vital amino acids. These are important because the body is seemingly unable to create them. They, therefore have to be transited from the food through the bloodstream. This vehicle is touted to carry even 8 of the nonessential amino acids along with it.

“It basically starves the cancer cell. The transporter can carry 18 of the known 20 amino acids, fuel all cells need in some combination. Amino acids enable cells to make proteins, which they need to function and survive. The cell type determines its amino acid needs and delivery system. Rapidly growing, dividing estrogen receptor-positive breast cancer needs nearly every amino acid so it makes the smart choice of utilizing the transporter that can deliver the biggest load,” explained Dr. Vadivel Ganapathy, Chairman of GHSU’s Department of Biochemistry and Molecular Biology.

The ride is supposedly swift as the mover has 3 sources of energy rather than the normal 1 or 2. Strikingly, SLC6A14 appears to be expressed in fewer amounts in most of the body parts. It seems to have specific features which could be exploited by each cell but they seemingly do not indulge in it. Normal tissues possibly express it in low levels. It doesn’t look like a loss for healthy cells, but boosts the cancer-fighting abilities of drugs that obstruct SLC6A14 which makes it a precise cancer target. Considering that normal cells do not rely on this transporter, a drug that particularly blocks it may be used to strike cancer cells.

A compound namely alpha-methyl-DL-tryptophan, which is usually used in humans for some time when they undergo a PET scan in the brain, was used in the analysis. The scientists treated it with estrogen receptor-positive breast cancer cells or immersed it in drinking water of the mice possessing these cells. The outcome showed that the rapid development of cancer cells seemed to cease and the tumorous cells were presumably killed. Further studies put forth that alpha-methyl-DL-tryptophan appeared to affect just those cells that expressed the SLC6A14 transport mechanism. Also, estrogen receptor-negative breast cancer did not apparently face any effect. The team is now on its way to spot the most plausible form of the compound.

The findings are published in the Journal of Biological Chemistry.