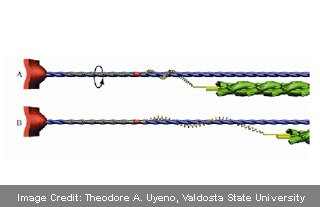 Ballistic prey catching used by toads and chameleons to trap food with their tongues may change principal views on muscle movement. Based on this concept, scientists from the Northern Arizona University have created a new hypothesis on spring-loaded muscles.

The findings can be implicated in the realm of movement neuroscience and looks promising in the field of bionics, exoskeleton robotic suits and advanced prosthetics in a way that the term transhumanism is making rounds.

“It turns out that our bodies are interacting with the environment all the time and our muscles can manage that interaction in a smart way without any intervention from the brain. There’s never been a model that explained how muscles are able to do that until now,” commented lead author Kiisa Nishikawa.

Nishikawa’s view offers credibility to one of the approaches which explains that the body and muscles have many passive-dynamic properties. She believes that the brain’s job is to learn and not impede in the passive dynamics. To show this effect, the team constructed a physical model that shows all the non-linear attributes of muscle. This allows it to adjust with the alterations in the surroundings almost instantly.

Practically, the applications can be found in any device used by humans where the ultimate regulator is the brain. The capacity to enhance these devices using this school of thought sounds acceptable as the human brain wants its actuators to be muscles. Therefore, if they are made to work like muscles, the outcome is deemed to be more convenient and effective.

Nishikawa said that the muscle theory mostly came from the period 1925-1975 which revealed that muscles stretch tendons and the process of getting back energy from the tendons seemingly gave rise to high power movement. However, in the 1980s, the comparatively late recovery of titin which is the largest protein found ever, appeared to question the traditional concept.

Nishikawa added that the human arms and legs are full of tendons. But the heads and jaws are devoid though there are few short ones. This brought the team to the conclusion that there ought to be a spring within the real working unit of muscle. The hypothesis states that titin is that spring. Being at a micron in length and 2 nanometers in diameter, it may not be viewed directly but can be modeled. The team has plans of partnering with companies like iWalk and SpringActive that present prosthetic advancements.

The paper namely, ‘Is Titin a ‘Winding Filament’? A New Twist on Muscle Contraction,’ is published in the journal Proceedings of the Royal Society B.