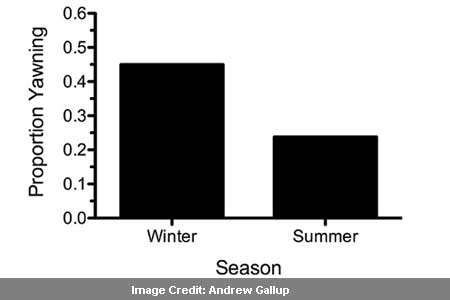 Yawning, over the ages, has been considered to be a sign of the person requiring sleep or even stress and boredom. Although, a recent study by a group of scientists from the Princeton University sheds light on the possibility that yawning could be an activity of the body to cool down the brain.

The study which determines the factors affecting yawning and the reasons behind this activity is the first of its kind to involve humans. The prime inference of this study shows that yawning frequencies vary with season and temperature changes.

As a part of this study, 160 people from Tucson, Arizona were observed for their yawning habits. Of these, over 80 subjects were observed during the season of summer, the rest half during the winter. According to the data recorded in this study, almost half the participants yawned in winter, opposed to less than a quarter in the summertime.

Aiding this study, Gallup puts forth the brain cooling hypothesis. According to this, ambient air or temperature is an affecting factor in the body producing a yawn. Thus, there should be a ‘thermal window’ or a relatively narrow range of ambient temperatures in which to expect highest rates of yawning.

“To test this theory in humans, I worked with Omar Eldakar to conduct a field-observational experiment that explored the relationship between ambient temperature and yawning frequency. We measured the incidence of yawning among people outdoors during the summer and winter months in Arizona. Summer conditions provided temperatures that matched or slightly exceeded body temperature (an average of 98.6 degrees Fahrenheit) with relatively low humidity, while winter conditions exhibited milder temperatures (71 degrees Fahrenheit on average) and slightly higher humidity. We randomly selected 160 pedestrians (80 for each season) and, because yawning is contagious, had them view images of people yawning,” explains Andrew Gallup from the Department of Ecology and Evolutionary Biology, Princeton University. The study was co-authored by Omar Eldakar, a postdoctoral fellow in the University of Arizona’s Center for Insect Science.

Thus, the findings of this study suggest that when temperatures outside fluctuate with respect to body temperatures, the process of yawning helps the brain to cool down or maintain its temperature. Other than this, it was also observed that yawning was related to the length of time a person spent outside exposed to the climate conditions.

The report for this study was published in the Frontiers in Evolutionary Neuroscience journal.