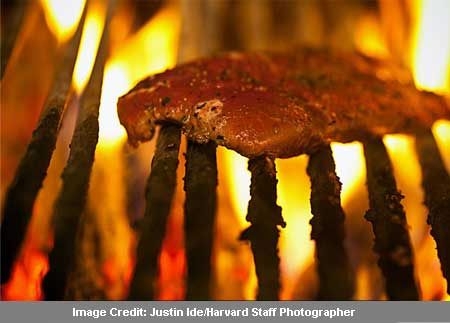 Though the benefits of cooking are exploited by most of us, consumption of raw food has gained momentum in recent years. This is mostly due to the widespread health advantages it has been alleged to have. Contradicting this notion, a research by experts from the Harvard University has revealed that cooked meat tends to provide more energy than raw meat.

This finding is a challenge to the present food labeling system and puts forth that humans are prone to take advantage of the effects of cooking right from the evolutionary days.

Rachel Carmody, a Ph.D. candidate in the Department of Human Evolutionary Biology at Harvard’s Graduate School of Arts and Sciences remarked, “Every day, humans in every global society devote time and energy to processing food — cooking it, grinding it, slicing it, pounding it — yet we don’t understand what effect these efforts have on the energy we extract from food, or the role they might have played in our evolution. It is astonishing, since energy gain is the primary reason we eat.”

This was a one of a kind experiment where the team exposed two sets of mice to four types of meat or sweet potato prepared in 4 distinct ways namely, raw and whole, raw and pounded, cooked and whole and lastly, cooked and pounded. These were given to the subject mice for a span of 40 days.

For gauging the outcomes, the researchers inspected alterations in weight of mice along with their appetite and physical activities. They found that cooked meat apparently provided more energy than raw meat and this result was applicable to sweet potatoes as well.

Moreover, the energetic output seemed to be higher in cooked food as compared to pounded food. Also, cooking appeared to raise the energy levels of pre-pounded foods. According to preference trials, hungry mice supposedly opted for cooked foodstuffs which implicated that the energy benefits seen in the latter were already apparent to the mice.

This research has presumably unfolded many deep-seated aspects of evolution with regards to cooking. Interestingly, the belief that the human body is an efficient digestion machine could be wrong. Nevertheless, the effectiveness of the digestive system may be influenced by food processing methods, specifically cooking.

The findings are published in the journal, Proceedings of the National Academy of Sciences.