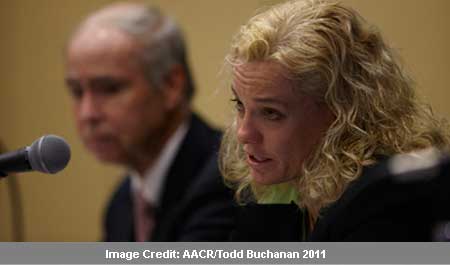 Most breast cancer patients are exposed to the drug tamoxifen but with no apparent benefits of the same. Either the drug evokes low responsiveness or the body develops resistance to it. Seeking to make tamoxifen work, scientists from the University of California (UCSF) have uncovered a molecular basis for the drug’s resistance which may help combat it.

The researchers found that when cancer cells interacted with the aforesaid drug, they seemed to show responsiveness by boosting the activation of a gene known as AKT. The latter is a survival gene that prohibits cells from dying and helps the growth of normal cells. However, under cancerous conditions, the drug apparently enables the cancer cells to access the estrogen receptor even while tamoxifen is present, thus causing resistance to the same.

“Understanding the mechanism of tamoxifen resistance and how to defeat it may help a large number of women with hormone-resistant breast cancer. It may lead quickly to new, more effective treatment strategies and may help to identify biomarkers to help to gauge whether or not someone will respond to treatment in the first place,” commented UCSF oncologist Pamela Munster.

This analysis unfolded compounds called histone deacetylase inhibitors that supposedly strike AKT, 2 of which are already approved by the FDA for treating lymphoma. In the trial, the team found that when lab cells received these histone deacytalase inhibitors, the proportions of AKT presumably dropped. In this scenario, when tamoxifen was administered to the cells, the metastasis of the tumor seemed to be prevented.

However, additional tests to affirm if histone deacetylase inhibitors may be both safe and effective are underway. The research was presented at the Moscone Convention Center in San Francisco.