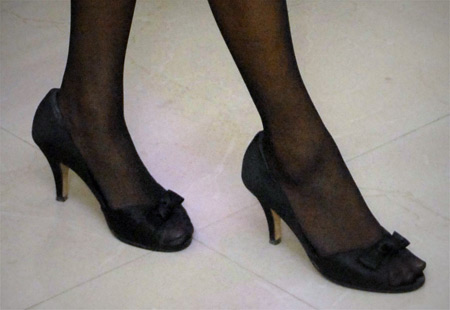 Many of us are aware that wearing high heels may not be as comforting as normal shoes, but we wear them to compliment our fashionable lifestyle. A study by professionals from the University of Jyvaskyla has revealed that long term high heel usage may alter the neuromechanics associated with walking and cause muscle fatigue too.

For the analysis, 9 individuals who wore 5cm high heels regularly for a minimum of 40 hours in a span of 2 years, were included. The control group consisted of persons who wore high heels for less than 10 hours every week. Both these sets of participants were instructed to walk at self-selected speed above ground level, while their gastrocnemius fascicle strains, knee joint kinematics and lower limb muscle activities were noted down.

As per the results, habitual high heel wearers apparently encountered significant increases in muscle fascicle strains and muscle activation, while they were in the stance stage, as compared to the period when they walked barefoot.

The scientists found that long-term high heel usage could deter muscle efficacy while walking that goes in line with other findings related to the discomfort and muscle fatigue experienced by habitual high heel wearers. This practice could also put women at risk for strain injuries, the team added.

According to experts, high heel shoes supposedly changed the functional demands received by the lower limb muscle-tendon structures, which caused the foot to settle in a plantarflexed position. Also, long term high heel usage could shrink medial gastrocnemius muscle fascicles and elevate the rigidness of the Achilles tendon. However, the effect of these alterations on locomotor muscle-tendon operations is not clear, the analysts concluded.

The study is published in the Journal of Applied Physiology.