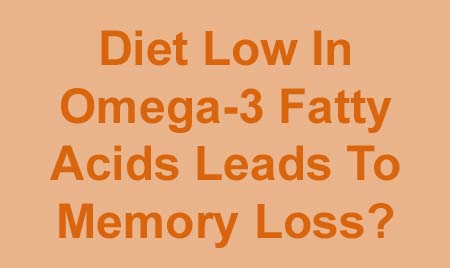 A recent report cited fish oil to be an important contributor towards cognitive health. Further backing this idea is a study by scientists from the University of California (UCLA) and American Academy of Neurology (AAN), which reveals that a diet deficient in omega-3 fatty acids could lead to memory problems.

As part of the trial, 1,575 individuals aged 67 on an average and devoid of dementia were exposed to MRI scans. They also underwent tests to gauge the proportions of omega-3 fatty acids in the blood, their mental functions and body weight. The scientists measured the nutrients of omega-3 fatty acids such as eicosapentaenoic acid (EPA) and docosahexaenoic acid (DHA) in the blood of the subjects.

“People with lower blood levels of omega-3 fatty acids had lower brain volumes that were equivalent to about two years of structural brain aging,” commented study author Zaldy S. Tan, MD, MPH, of the Easton Center for Alzheimer’s Disease Research and the Division of Geriatrics, University of California at Los Angeles.

The outcomes of the study showed that people with low DHA levels seemingly manifested lower brain volumes, relative to those with higher amounts of the same. Moreover, participants with low DHA also appeared to score less than their counterparts with high levels of the latter, in terms of executive functions and visual memory. Volunteers lacking sufficient amounts of the aforesaid nutrients also apparently scored less in tests related to multitasking, abstract thinking and problem solving.

Omega-3 fatty acids are mostly found in fish oil that is reported of preventing Alzheimer’s disease too. This analysis is published in the journal, Neurology, the medical journal of the American Academy of Neurology.

An Insight on Age-related Macular Degeneration