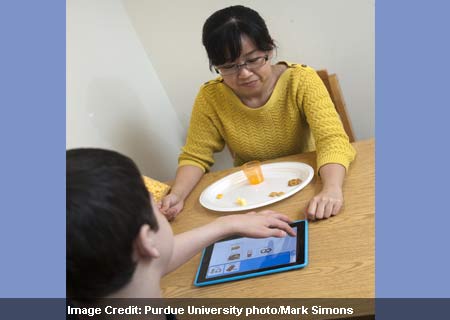 Apple’s iPad has found applications in various realms right from basic entertainment to medicine, but experts generally advise to use it in moderation, especially among kids. Just like we’ve seen before another app for autistic children has been created for use on the iPad by students from the Purdue University.

Dubbed SPEAKall!, the facility enables kids to build sentences by selecting images and graphic signs. The app helps kids learn talking by playing the sentence on the device. This software had been up for download on iTunes since November last year and is quite popular with the masses.

“Fifty percent of children with severe autism are non-verbal, meaning they don’t develop speech or language skills needed to communicate. One strategy to get the children started with functional communication is a low-technology approach where they learn to pick up a graphic symbol card and exchange it for a desired item,” commented Oliver Wendt, an assistant professor of speech, language and hearing sciences.

Imagine a scenario. A child goes to a restaurant and wishes to place an order. The person in question can simply construct the sentence on the slate and play it loud for the order-taker. By listening to how the sentence is read out precisely, kids may improve their own skills.

According to the developers, this app is ideal for use among older children in the age-group 9 to 12. Though small kids could give it a try, sensory and behavioral issues may crop up. Considering that speech disabilities are common among children with autism, such initiatives could come as a welcome addition in their lives.

Facial Moles could be the secret to looking Young, finds new...