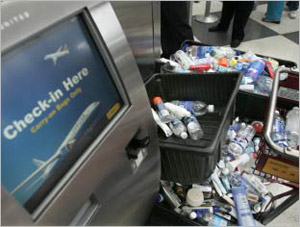 Air travelers who have medical conditions may suffer dehydration or other risks because of the new air travel restrictions that prohibit people from bringing drinks onto the plane, as increased security measures dues to the news of the diffused bomb found in a U.K airport. Bottled water and cans of nutritional supplement drinks are among the liquids that cannot be carried on board aircrafts.

According to Dr. Marc Siegel, an internal medicine physician with the New York University School of Medicine, such restrictions may pose some risk, starting with dehydration. Dehydration can place a very unhealthy strain on people with diseased hearts or kidneys. The dry air in the passenger cabin also dries out the mucous membranes that help to protect the body from invading bacteria and viruses.

The government ban does not apply to prescription medicines with labels that match the passenger’s name. And jets carry medical kits that stock medicines for heart attacks and certain other emergencies.

Atlanta-based Delta Air Lines Inc. on Thursday began provisioning extra bottled water on all flights because of the new travel restrictions, spokeswoman Betsy Talton said Friday. She declined to say how many bottles and how much it will cost Delta, the nation’s third-largest carrier.

Diabetics, who must travel with essential supplies, may be especially concerned by the new restrictions. Insulin pump manufacturers say pumps can safely go through airport security systems, but pump wearers may request a visual inspection rather than walking through the metal detector or being hand-wanded, said Rachel Morgan, a spokeswoman for the American Diabetes Association.

Most planes have medical supplies that address three of the most worrisome emergencies that can occur in the air, said Joan Sullivan Garrett, founder and chairman of MedAire Inc., an Arizona-based company that provides emergency medical kits and advisory services to airlines. They carry inhalers for asthma attacks, nitroglycerin for chest pains and many carry glucagon injections for diabetics who pass out with low blood sugar, she said.

Memory could decrease quickly in stage prior to Alzheimer disease