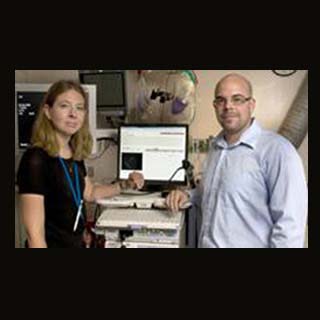 Researchers from The University of Arizona colleges of pharmacy and medicine are teaming up in order to develop a novel, safe non-invasive lung test for cystic fibrosis sufferers.

This procedure may perhaps be able to measure some of the information which can be taken with a bronchoalveolar lavage with similar accuracy.

Cystic fibrosis (CF) is known to be a disease which affects the lung. According to the Cystic Fibrosis Foundation, approximately 30,000 children and adults in the United States and about 70,000 worldwide seem to suffer from CF.

Apparently, this disease results from a genetic modification which lowers the function of chloride channels in the lung, thereby leading to a dry lung. A CF patient’s disease is believed to be very dangerous when his lungs become too dry.

The fluctuations of sodium, potassium and chloride inside the lung all appear to be vital in keeping the lung wet. In addition, wet lung seem to be of particular significance in cystic fibrosis.

Chief investigator, Eric Snyder, assistant professor at the College of Pharmacy stated that, “This research will provide data to further explore the development of a non-invasive tool to measure airway fluid composition. It will provide important preliminary data for future, larger studies in this patient population. Our goal is to invent a non-invasive test which will aid in the assessment and treatment of cystic fibrosis.”

Earlier studies using cell lines or animal tissues have shown that the direction of a common drug used in cystic fibrosis, a beta-agonist seems to increase the amount of chloride on cells. This drug may perhaps assist in keeping the lungs wet.

In order to optimize a person’s therapy, there seems to be no simple way to measure the amount of chloride in his lung cells. Apparently, this is where the problem lies.

These days, measuring what is on lung cells is believed to require an invasive test called bronchoalveolar lavage. Bronchoalveolar lavage is usually used to determine the level of disease severity by exploring inflammatory markers. However, Snyder claimed that it could also be used to collect signs of chloride, and probably lung dryness.

During bronchoalveolar lavage, the patient is observed to have been anesthetized and a tube is inserted into his lung. After that a small amount of water is sprayed into the lung’s airway and then sucked out through the tube. This fluid could possibly be then examined for a variety of factors. The bronchoalveolar technique seems to be invasive and carries some threat.

The non-invasive procedure which Snyder’s research may explore involves measuring signs of lung dryness. This could be measured by using a patient’s breath which is then condensed in a cooling chamber.

In order to do this, a patient will be required to breathe into a machine in Snyder’s laboratory in the College of Pharmacy. The machine seems to condense the patient’s breath in a cooling chamber so that the research team could measure the amount of sodium, potassium and chloride it contains.

Immediately after this non-invasive test, the patient will be needed to visit University Medical Center for a bronchoalveolar lavage. Supposedly, this will be performed under the direction of College of Medicine faculty Cori Daines, MD and Wayne Morgan.

Once the bronchoalveolar lavage is completed, the team may then compare the amount of sodium, potassium, and chloride ions gathered in that test to the amount gathered non-invasively in the breath test. Allegedly, this will allow them to check if the non-invasive test is as accurate in contrast to the invasive technique.

This research is called as ‘Quantification of Exhaled Condensate Using Bronchoalveolar Lavage in Cystic Fibrosis.’