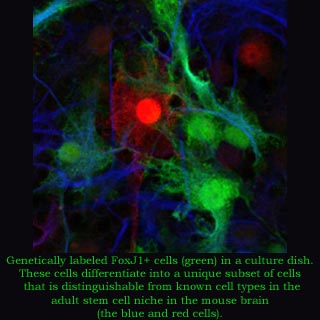 Scientists from North Carolina State University are believed to have recognized a gene that informs embryonic stem cells inside the brain when to stop producing nerve cells called neurons. This study seems to be considerable progress in understanding the development of the nervous system, which is crucial to addressing conditions such as Parkinson’s disease, Alzheimer’s disease and other neurological disorders.

The bulk of neuron production in the central nervous system is known to occur before birth and comes to a halt by birth. However, scientists have identified specific regions in the core of the brain that hold stem cells into adulthood and continue to produce novel neurons.

The study authors seem to have been examining the subventricular zone in mice, one of the regions that retain stem cells. They have found a gene that seems to act as a switch thereby transforming some embryonic stem cells into adult cells that can no longer produce new neurons.

Moreover, these cells could be able to form a layer of cells that support adult stem cells. The gene, called FoxJ1 is known to raise its activity near the time of birth, when neural development slows down. However, the FoxJ1 gene may perhaps not get activated in most of the stem cells in the subventricular zone. More so, this zone appears to be the place where new neurons continue to be produced into adulthood.

Senior author of the study, Dr. Troy Ghashghaei, an assistant professor of neurobiology at NC State said that, “Research into why and how some stem cells in the subventricular zone continue to produce new neurons is important because a biological understanding of how these cells function can contribute to new treatments to replace damaged or diseased brain tissue, hopefully in regions that cannot do this by themselves. This research helps us understand brain development itself, which is key to identifying novel approaches for treatment of many neurological disorders.”

When the FoxJ1 gene is activated, it seems to produce a protein that functions as a transcription factor. Transcription factors apparently swim via the nucleus of a cell turning other genes on and off as well as turning the embryonic stem cell into an adult cell.

At present, Ghashghaei’s lab appears to be moving ahead with latest study to determine what activates the FoxJ1 gene and how the FoxJ1 protein regulates the expression of other genes. This understanding supposedly will make known how the activation and inactivation of genes controlled by FoxJ1 arranges the development of the adult stem cell niche.

The findings of the study ‘FoxJ1-dependent gene expression is required for differentiation of radial glia into ependymal cells and a subset of astrocytes in the postnatal brain’ have been published in the journal, Development.