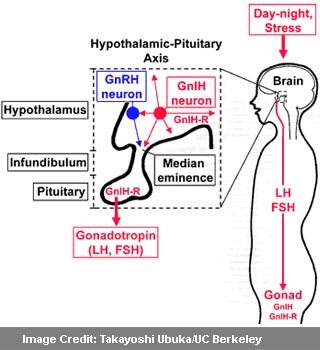 It was nearly 10 years ago that researchers claimed to have uncovered a hormone in birds which seemed to be capable of suppressing reproduction.

University of California, Berkeley, neuroscientists now seem to have established the presence of this hormone in humans too. Apparently humans also make the gonadotropin inhibitory hormone (GnIH) which could have serious implications in the development of new contraceptives. It may also make way for potential treatments of cancer and other diseases.

GnIH is considered to have a contrary effect as the gonadotropin releasing hormone (GnRH) which is a key reproductive hormone. GnRH is known to gear up the body for sex and procreation while GnIH appears to put a break on that very process.

“Identifying the inhibitory hormone in humans forces us to revise our understanding of the control mechanism of human reproduction,” commented first author Takayoshi Ubuka, a post-doctoral fellow in the UC Berkeley Department of Integrative Biology and in the Helen Wills Neuroscience Institute. “We hope this will stimulate clinical studies on people with precocious puberty or in the area of contraception.”

Researchers are of the opinion that the growth promotion of cancer cells by reproductive hormones may further allow GnIH to function as an anti-cancer agent.

“Frequently, treatment of hormone-responsive cancers involves GnRH antagonists or very, very high doses of GnRH, which cause side effects,” mentioned George Bentley, UC Berkeley assistant professor of integrative biology. “Maybe we can use something that inhibits reproduction at physiological levels, so that we can bypass some of these side effects.”

First discovered in 2000 in quail, GnIH has since been closely analyzed in other birds, mice and sheep. However its role in humans seems to have been difficult to pin down. The human genome though was identified to include the gene for GnIH, it didn’t seem to show where and when the protein hormone is generated. Also its effects on reproduction appeared to have been unclear.

Two versions of the hormone were extracted by the researchers from the hypothalamus regions of five human brains for the analysis. The hypothalamus was found to not only contain the hormone but along with the pituitary gland, it appeared to also have receptors for the hormone. The researchers found that the
They demonstrated that the human GnIH gene was capable of producing a precursor protein that is cut up to form 12 and 8 amino acid mature peptides.

“One of the peptides in sheep has the same amino acid sequence as the human peptide, so we can study its activity in sheep to learn about its activity in humans,” Bentley remarked. “It’s likely that the function of GnIH is evolutionarily conserved.”

In addition to this, they also exhibited that GnIH could affect nerve cells that secrete GnRH. This appears to be in line with earlier findings that suggest GnIH down-regulates GnRH.

“GnIH pushes the pause button on reproduction, but in a variety of ways,” Bentley said. “It can act on GnRH neurons in the hypothalamus, inhibiting GnRH release; it can act directly on the pituitary gland; or it can influence the gonads directly. The overall effect is to inhibit reproduction, but at different levels of the reproductive axis.”

Ubuka indicates GnIH to be an essential regulator of puberty.

The findings have been reported in the Dec. 22 online issue of the public access journal PLoS One.