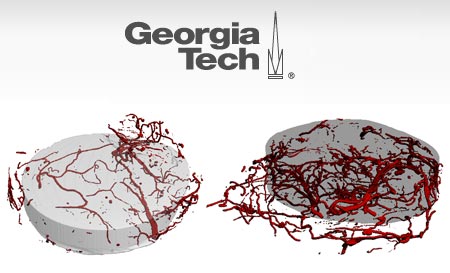 A few days back, a new chip with nanosense using a hydrogel surface and mimicking the function of heart cells caught our attention. These synthetic polymers it appears also helped researchers at the Georgia Institute of Technology to induce significant vasculature growth in areas of damaged tissue. At the injury location, most regenerative medicine therapies seem to need the growth of functional stable blood vessels.

For the analysis, the researchers fabricated the biochemical and mechanical properties of polyethylene glycol-based hydrogel matrices. This they did so as to enable vasculature to form in and around them. The experts first included particular chemical cross-links into the gels. This apparently allowed them to retain their structural integrity. Thus, they appeared to have degraded only in the presence of enzymes called matrix metalloproteinases. These are typically expressed by invading cells.

In addition to this, a protein vascular endothelial growth factor (VEGF) was also incorporated into the matrices. The protein is believed to stimulate the growth of blood vessels. Besides, the experts also reveal to have added adhesive amino acid sequences to the gel. They claim to have done so to enable the cells to spread within the gel and allow interaction with nearby endothelial cells undergoing the blood vessel growth process called angiogenesis.

“This study shows that bio-artificial materials are suitable for promoting vasculature growth and remodeling,” remarked lead author on the research Andres Garcia, professor and Woodruff Faculty Fellow in Georgia Tech’s Woodruff School of Mechanical Engineering and the Petit Institute for Bioengineering and Bioscience. “Because hydrogels are very compatible with biological tissues, they are a promising therapeutic delivery vehicle to improve treatment of peripheral artery disease, ischemic heart disease, and survival of cell and tissue transplants.”

“Incorporating these cross-links controlled the release of VEGF from the matrix so that VEGF was only released as the matrix was digested by invading cells,” explained García. “This was very important because if you have something solid such as a matrix that cannot degrade, you will not have any vasculature growth into that area.”

The researchers observed that when they implanted the the pre-formed hydrogel constructs into small animals, the matrix seemed to show constant levels of VEGF for two days. It appeared to have been followed by a gradual decrease during the following 12 days. When soluble VEGF was injected into the animals, a steady decline of VEGF was recorded. This appeared to have been true until 90 percent of the compound was lost within two weeks.

“With the degradable implant that included growth factors, after two weeks we saw that new vessels were growing into and around the implant,” noted Phelps.

Furthermore, various analyses with micro-CT imaging seem to exhibit a six-fold increase in vascular density at two weeks and a 12-fold increase in vascular density at four weeks. It seems to be accompanied with the degradable matrix compared to an injection of soluble VEGF. Another observation was that they hydrogel seems to have degraded in a controlled manner and was replaced by normal tissue.

“We found that the vasculature was functional and connected to the host circulatory system, which we saw when a contrast agent injected through the aorta reached the vessels in the implant,” added García.

Next, the researchers reveal to have created a liquid material that could form a gel inside the body when exposed to ultraviolet light. This allowed them to place the hydrogel deeper inside the body than the pre-formed matrix construct would permit. It also appears to have let fill in an injured area of any shape.

“In reality, most injuries are not well-defined defects so you can’t take a pre-formed construct and fill the irregular-sized site,” further mentioned García. “Instead, you want to be able to access the area in a minimally invasive way and injecting this solution through the skin allows us to do that without surgery.”

The VEGF-containing matrix solution was injected into mice that seemed to have been suffering from restricted blood flow called ischemia in one leg. Seven days after receiving the injection, the animals appeared to show a 50 percent increase in blood perfusion to the affected leg along with a 100 percent increase in perfusion to the affected foot.

Supposedly the blood flow to the affected leg was greatly improved as against to treatment that solely included a non-degradable hydrogel and injection of soluble growth factors. Growth factor sequestration in the matrix is suggested to be the cause for increased perfusion as per the researchers. This may have led to prolonged exposure that stayed on as the matrix was degraded and remodeled.

The clinical viability of these hydrogels as therapeutic vascularization therapies to treat peripheral artery disease and ischemic heart disease, and cell transplantation to treat diabetes are presently being examined.

The details of the research were published in the early edition of the journal Proceedings of the National Academy of Sciences on December 21, 2009