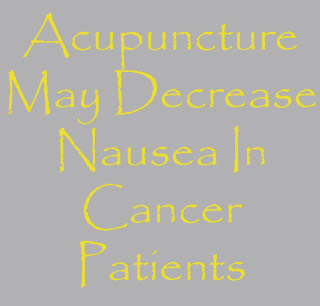 It now seems that simulated acupuncture is equally beneficial as real acupuncture. A recent study from the Karolinska Institute and Linköping University asserts that acupuncture is greatly beneficial in treating nausea among cancer patients subjected to radiotherapy. It was mentioned that patients receiving only conventional medicine for nausea may feel much more poorly than those provided with acupuncture.

“The positive effects appear to not depend on the traditional acupuncture approach, but probably on the patients’ positive expectations and the increased care by the processing. Patients could converse with the acupuncture treatment physiotherapists, they were touched and extra time for rest and relaxation, “enlightened Anna Enblom, physical therapist and investigator at the Osher Center for Integrative Medicine at Karolinska Institutet.

The acupuncture-treated patients were compared with 62 patients who only received care according to standard procedures with anti-nausea, no acupuncture. It was pointed out that patients subjected to real or sham acupuncture felt remarkably less ill than the group who only received care according to standard procedures. Among the patients who received any form of acupuncture, 37 percent apparently felt bad and 7 percent vomited than 63 percent and 15 percent of those who received usual care. Scientists were unable to register any difference between the two acupuncture groups. Also the patient’s expectations may have a significant impact on nausea.

The study is published in the scientific journal PLoS ONE.