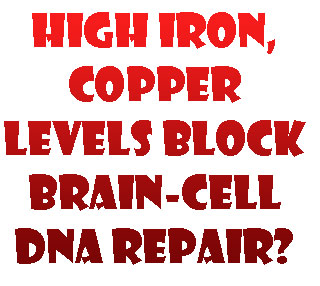 While causes of most cases of Alzheimer’s and Parkinson’s are not yet clear, scientists have been linking such conditions with certain weakening factors. According to a research by University of Texas Medical Branch at Galveston scientists, a high level of copper or iron results into two problems in the brain, firstly it helps generate large numbers of DNA-attacking reactive oxygen species and secondly it disturbs the machinery of DNA repair that is known to prevent the injurious consequences of genome damage.

It is essential to have iron and copper in the blood stream in normal quantities. Proteins that usually bring the metals together and set them apart for safe storage get overwhelmed when these are present in larger quantities in tissues of some people. These are more likely to produce ‘free’ iron or copper ions in the blood that initiated the chemical reactions responsible for production of reactive oxygen species.

“It’s been suggested that an imbalance of DNA damage and repair produces a buildup of unrepaired genetic damage that can initiate neurodegenerative pathology. We don’t yet know enough about all the biochemical mechanisms involved, but we have found multiple toxic mechanisms linking elevated iron and copper levels in the brain and extensive DNA damage — pathological features associated with most neurodegenerative disorders,” reported postdoctoral fellow Muralidhar Hegde, lead author of the paper.

He further stated that reactive oxygen species are responsible for most of the brain cell DNA damage that had been observed in many other neurodegenerative disorders apart from Alzheimer’s and Parkinson’s. Even if one strand of DNA double helix is damaged, the result is bad enough. On the other hand, the cell can decay if there is a double strand break due to damage of both the strands at locations close to each other.

It is generally known that the genomes integrity is maintained by certain DNA repair enzymes that treat the injury rather quickly. The experiments conducted in the above research seem to show that activity of two repair enzymes NEIL1 and NEIL2 are disrupted significantly by iron and copper. The result showed that inhibition of NEIL1 and NEIL2 are mainly due to copper and iron which eventually resulted in accumulation of DNA damage in neurodegenerative diseases.

Certain substances that bond with iron and copper seemed to protect NEIL1 from the metals which took the scientists by a surprise. A South Asian spice called Curcumin was one of the strongest protective agents. It also had other positive heath effects. Hegde commented that the results from Curcumin are quite beautiful. He specified that it was very effective in maintaining NEIL activity in cells reactive to copper and iron.

The research is mentioned in the current journal of Alzheimer’s disease.