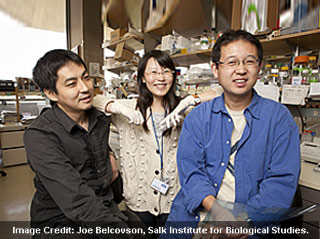 The principle of genetic programming looks simple on paper but practically replacing a faulty gene with a healthy copy is a difficult process. To demonstrate the versatility of the virus based approach, researchers at Salk Institute for Biological Studies took mutated versions of the lamin A gene as an example. They were successful in editing a diseased gene in pluripotent stem cells and adult stem cells using the patient specific induction method.

Gene therapy is basically a process of healthy copy of a gene to compensate for a defective one in the patient but there is a major limitation to it. Most therapeutic genes are expressed only on temporary basis as the host cell shutting them off or are not satisfactory as they fail to occupy the same position in the genomes as the natural genes.

The researchers have been trying to develop methods to get over these difficulties. The main objective was to precisely cause the section of the genome to enclose the mutated gene and replace it with a matching fragment but without mutation. One of the methods involves using molecular ‘fingers’ that seize onto DNA to weave in the new sequence.

“The ability to derive and grow human pluripotent stem cells in the laboratory has raised enormous expectations within the biomedical community due to their transplantational potential in clinical settings. This, when combined with the development of efficient and safe gene editing technologies in human stem cells may greatly help the realization of these expectations,” commented Izpisúa Belmonte, a professor in the Gene Expression Laboratory and the lead scientist.

The first co-author continues to say that some problems related to the zinc finger method had not been resolved. The change would be to bring in the zinc fingers to the desired sequence to restrict DNA breaks or new mutation at other locations in the genome.

As a part of the research an iPS-based model of Hutchinson-Gilford progeria, which was recently established in the laboratory of Izpisúa Belmonte was taken advantage of to resolve problems related to earlier methods. Hutchison Gilford progeria is a rare genetic disorder resulting in premature aging. It is mainly caused by protein scaffold on the inner edge of the nucleus that helps maintain chromatin structure and organize nuclear processes such as RNA and DNA synthesis. This is due to a single point mutation in the gene encrypting lamin A.

It has been reported that there are more than 400 varied mutations in the lamin A gene that are responsible for a different human degenerative diseases like muscular dystrophy, dystrophy, lipodystrophies and neuropathies.

The gene targeting approach put forward by the researchers is based on adenoviral vector to deliver large mutation free DNA molecules into cells that is known to be helper dependent. Once they reach there, a process known as homologous recombination is initiated by the replacement pieces. It functions similar to the ‘find and replace’ command in a word processor. A piece of DNA finds and lines itself with the same sequence in the genome and interchanges the place if it is long enough.

The researchers mention that the process was effective and they did not detect any other effects that went off the target like such as genomic instability or epigenetic abnormalities. This also showed that correction of multiple mutations spanning large genomic regions was possible too.

Apart from iPS cells obtained from progeria-patients, this method was applied on adult mesenchymal stem cells including adipocytes, osteoblasts, chondrocytes, cardiomyocytes, and, as described lately, beta-pancreatic islets cells too. The researchers further specify that the focus on mesenchymal stem cells was mainly because of their extensive use in regenerative medicine and used as a proof of principle. Mesoderm-derived tissues are mainly affected by lamin A mutations and therefore editing in these cells could be an engaging therapeutic option.

This research provides an efficient and safe tool for cell engineering, and opens the way for gene editing-based stem cell therapies suitable for clinical applications.

The research will be published in the June 3 issue of Cell Stem Cell.