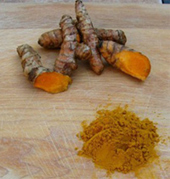 Yellow Ginger, also known as turmeric and locally better known as Haldi in India is the yellow root of Curcuma longa. This spice is a staple ingredient in curries and research on it has proved that turmeric is really healthy. Tze-Pin Ng and his colleagues at the National University of Singapore have discovered that curry eating seems to boost brain power in the elderly people.

Turmeric is made up of Curcumin, which is an antioxidant, and varios reports have suggested that it inhibits the build-up of amyloid plaques in people suffering from Alzheimer’s.

Tze-Pin Ng’s team looked at the curry-eating habits of 1010 Asian people unaffected by Alzheimer’s and who were aged between 60 and 93. The team compared these volunteer’s performance in a standard test of cognitive function called the Mini Mental State Examination.

“What is remarkable is that apparently one needs only to consume curry once in a while for the better cognitive performance to be evidenced,” says Ng, who says he wants to confirm the results, possibly in a controlled clinical trial comparing curcumin and a placebo.