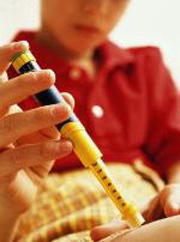 In a study of children with type 1 diabetes who were treated with insulin pump therapy, temporarily stopping insulin helped in preventing a decline in blood sugar (hypoglycemia) during exercise. However, the risk of high blood sugar (hyperglycemia) increased.

Regular exercise is encouraged for children with type 1 diabetes, but it is often difficult to maintain normal sugar levels during prolonged periods of physical activity. In particular, exercise can lead to an increased use of sugar, resulting in hypoglycemia.

Dr. Eva Tsalikian, from the Jaeb Center for Health Research in Tampa, Florida, and other members of the Diabetes Research in Children Network Group evaluated the effect of stopping the insulin pump during exercise in 49 diabetic children. A number of studies have looked at the process of exercise-induced hypoglycemia in children with type 1 diabetes, but few have examined strategies for preventing this problem.

The subjects were randomly assigned to stop or not stop insulin during four 15-minute treadmill cycles (target heart rate of 140 beats per minute), interspersed with 5-minute rest breaks. Sugar levels were measured before, during, and after exercise. The children switched groups and process was repeated on a second day.

The rate of hypoglycemia, defined as a blood sugar level of 70 milligrams per decaliter or lower, was 16 percent with during insulin suspension compared with a rate of 43 percent when insulin was not stopped.

The rate of hyperglycemia, defined as an increase in sugar levels of at least 20 percent to at least 200 milligrams per decaliter at 45 minutes after completion of exercise was higher in the insulin suspension group: 27 percent vs. 4 percent.

Turning off the insulin pump during exercise is an effective strategy for reducing hypoglycemia in children with type 1 diabetes, but the risk of hyperglycemia is increased, the researchers state.

They also point out that while this strategy is possible for patients on insulin pump therapy, it is not meant for those who take multiple daily injections of long-acting insulin for insulin replacement.