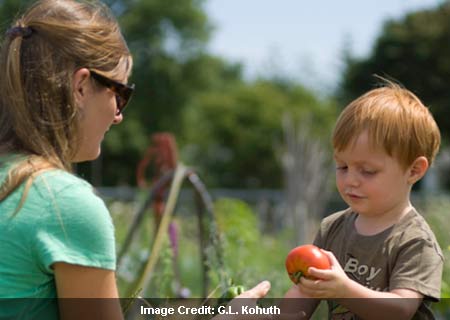 Is there any doubt that children tend to follow in the footsteps of their immediate surroundings? Simply put, experts from the Michigan State University have revealed that mothers need to opt for healthy diets themselves to instill the same habit in their kids.

According to the team, use of punishments, rewards or other forms of strict action may not work. Basically, the findings reported in the American Journal of Clinical Nutrition showed that parents need to have healthy food and motivate their little ones to do the same.

“Mothers should stop forcing or restricting their kids’ eating. They’d be better off providing a healthy food environment, adopting balanced eating habits themselves and covertly controlling their children’s diet quality by not bringing less healthy foods into the house,” quoted Sharon Hoerr, MSU professor of food science and human nutrition.

As seen in the study, mothers who convinced their kids into having healthy foods by setting examples appeared to have children doing just that. On the other hand, mothers who forced their children into consuming vegetables or other nutritious food did not have kids eating them.

The scientists added that severely restricting certain foods for kids may drive them to alternative junk sources. Parents need to maintain both meal and snack times for their children as well as keep giving them healthy foods throughout the day. In case of choosy eaters, it could be better off to motivate them to have the right kind of food. Besides, interactive ways like taking children to grocery stores, accepting their help during cooking and making them taste new foods may work.