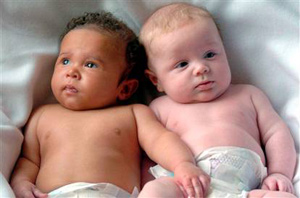 A pair of British twin boys has been born with different skin color. According to experts, this is a rare genetic occurrence. In an interview with Britain’s Sky News program, mother Kerry Richardson said that the boys were both born white but as they’ve gotten older one of the boys got darker and the other lighter.

Today, she says, the twins attract attention wherever they go.

Richardson is of mixed race, with Nigerian and English heritage, while the father is white.

A genetics expert at Oxford University says such births are rare, as the genes that cause skin color normally mix together. In this case, he says, it appears the genes for skin color didn’t combine for some reason and the boys may have inherited different genetic codes from their mother.