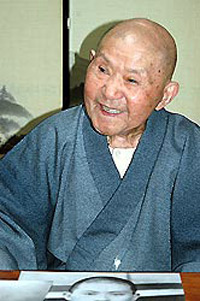 A 111-year old Japanese man has officially been named the world’s oldest living male. On Monday, Tomoji Tanabe received a certificate from Britain’s Guinness World Records stating that he was the oldest man alive.

Tanabe is from the southern Japanese province of Miyazaki. He received a framed certificate from the mayor of the Miyakonojo city, where he resides with his one of his sons.

“It’s nothing extraordinary,” Tanabe was quoted as saying.

Tanabe was born on September 18, 1895. He grew up in Miyakonojo and raised eight children.

He said that the key to his longevity was probably because he stayed off alcohol.

Tanabe is the oldest man alive today. But, there is someone older than him. A Japanese woman named Yone Minagawa, who lives in the southern Japanese province of Fukuoko has been named as the oldest person alive at the age of 114 years.

Study says a smile brightens your face as well as your...