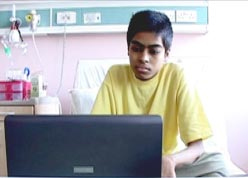 For the first time in the world, Indian doctors have successfully conducted two transplantations simultaneously on a young boy.

Ganesh Nehru, 1, a Grade 9 student from California successfully got a kidney and liver transplant done at the same time. Last year, Ganesh was diagnosed with advanced kidney failure and a rare amino acid metabolism disorder.

According to Ganesh’s doctor Arvind Soin, “Ganesh had this condition of primary hyperoxaluria because of which he developed kidney failure and deposition of oxalates all over his body. Now the only cure for this condition is a combined liver and kidney transplant.”

Ganesh’s mother Hemlata donated a kidney to him and his uncle donated half his liver. The operation took surgeons 18 hours to complete.

On Tuesday, three weeks after the surgery, Ganesh is back on his feet busy checking out the latest in Hollywood on his laptop.