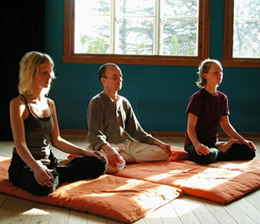 A new study has found that directed mental training, such as meditation, can actually help to fine-tune a person’s control over attention.

This study was conducted by a team of researchers led by Heleen Slagter and Richard Davidson, at the University of Wisconsin-Madison.

A person has an infinite amount of brainpower, and thus, paying close attention to one thing may mean the tradeoff of missing something that follows shortly thereafter.

For instance, when two visual signals are shown a half-second apart, people tend to miss the second one most of the time.

Davidson said, “The attention momentarily goes off-line. Your attention gets stuck on the first target, then miss the second one. This effect is called ‘attentional blink’, as when you blink your eyes, you are briefly unaware of visual signals.”

As part of the study, researchers recruited subjects interested in meditation to examine the effects of three months of intensive training in Vipassana meditation, which focuses on reducing mental distraction and improving sensory awareness to study whether conscious mental training can affect attention.

Volunteers were asked to look for target numbers that were mixed into a series of distracting letters and quickly flashed on a screen. As subjects performed the task, their brain activity was recorded with electrodes placed on the scalp. In some cases, two target numbers appeared in the series less than one-half second apart, close enough to fall within the typical attentional blink window.

Researchers found that three months of rigorous training in Vipassana meditation improved people’s ability to detect a second target within the half-second time window. In addition, though the ability to see the first target did not change, the mental training reduced the amount of brain activity associated with seeing the first target.

“The decrease [of brain activity associated with the first target] strongly predicted the accuracy of their ability to detect the second target,” Davidson said.

The results of the study show that devoting fewer neural resources to the first target leaves enough left over to attend to another target that follows shortly after it. Because the subjects were not meditating during the test, their improvement suggests that prior training can cause lasting changes in how people allocate their mental resources.

“Their previous practice of meditation is influencing their performance on this task says. The conventional view is that attentional resources are limited. This shows that attention capabilities can be enhanced through learning,” Davidson added.