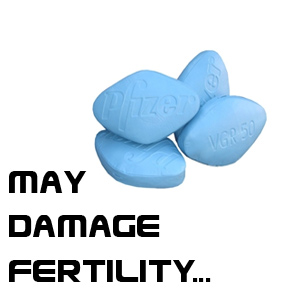 Viagra might help men boost their performance in the bedroom, but it can also damage their ability to father a child, A new British study has suggested this. Researchers at the Queen’s University in Belfast have found that young men who take the anti-impotence drug recreationally could be damaging their sperm quality, thus spoiling their chances of starting a family.

Dr. David Glenn, a consultant gynaecologist at Queen’s University Belfast, carried out two experiments to find the effects of Viagra.

In the first experiment, the researchers bathed sperm samples in weak solutions of Viagra to mimic the level found in the blood of a man who has taken a single pill.

They found that Viagra made sperm more active than untreated sperm, but it also appeared to damage the acrosome – the part containing the enzymes needed to break down the membrane surrounding a woman’s egg to allow sperm to fertilise it.

“Essentially the acrosome breaks open too early in sperm that has been exposed to Viagra. The sperm cannot get into the egg and so it is not fertilised,” said Dr. Glenn.

The other experiment found mice that had been given Viagra produced 40 per cent fewer embryos than other mice.

The study has raised concern that young men, who take the drug regularly either for impotence or recreationally could be unknowingly damaging their fertility. It further indicated that fertility clinics that give the drugs to patients could be making the problem worse.

“I’ve never used it because most men are quite capable of producing a sample without it, and for the occasional man who isn’t, we use a frozen sample where performance anxiety is not an issue,” he said.

“It hasn’t yet been demonstrated in humans and we also don’t know how long-lasting (the effect) it is. But if you’re a young man and you’re using it regularly then I’d suggest you probably shouldn’t if you’re planning a family,” he added.