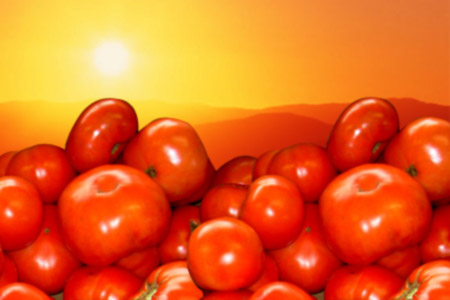 Ooof! This sunny day makes everyone feel so exhausted. What would help is beat this summer’s sunburn? To resist heat in summer season there is a simple and effective solution found to fight these sunburns and other problems of wretched wrinkles and skin cancer. To fight against the sunburn you just have to include the intake of tomatoes in your daily diet.

The Universities of Newcastle and Manchester have discovered that tomatoes could be the new weapon to fight against sun damage. The findings were that if you add only 5 tablespoons of tomato paste to routine diet then it can perk up the skins ability to protect against harmful UV rays. The study was read and presented at the British Society for Investigative Dermatology this month, which said that eating tomato paste could help protect against sunburn and sun-induced skin ageing.

Researchers compared the skin of 20 people. 10 of who were given five tablespoons (55g) of standard tomato paste with 10g of olive oil daily. And the other 10 were given only olive oil, for a phase of 12 weeks. In this process people who were made to have the tomato paste were exposed to the ultraviolet (UV) light at the start and end of the trial. There were considerable improvements in the skin’s capacity to protect itself against UV light.

“The tomato diet boosted the level of procollagen in the skin significantly. These increasing levels suggest potential reversal of the skin ageing process. This is in addition to the significant reduction in sunburn. These weren’t huge amounts of tomato we were feeding the group. It was the sort of quantity you would easily manage if you eating a lot of tomato-based meals,” says Professor Lesley Rhodes, dermatologist at the University of Manchester.

There is surplus production of harmful molecules identified as ‘reactive oxygen species’ in the UV light which harms the vital skin structures. Tomato acts as a skin saving property which has a powerful antioxidant called ‘lycopene’. The harmful molecule lycopene enables the skin to neutralize or ‘quench’ the harmful molecules. The findings were that those who had eaten the tomato paste received 33% more protection against sunburn. The researchers also compared the protection offered by the tomato paste to be equivalent to a sunscreen with a sun protection factor (SPF) of 1.3. The Manchester team also discovered that the intake of tomato diet had enhanced the skin levels of procollagen, a molecule which gives the skin its structure and loss of which leads to skin ageing and lack of elasticity.

Professor Lesley Rhodes added, “People should not think that tomatoes in any way can replace sun creams, but they may be a good additive. If you can improve your protection through your diet then over several years, this may have a significant effect.”

“Eating tomatoes will not make you invincible in the sun, but it may be a useful addition to sun protection along with sunscreens, shade and clothing”, says Professor Mark Birch-Machin, dermatology scientist from Newcastle University.

BirchMachin added “The protective effect of eating tomatoes on our mitochondria is important as they are the energy producers in all our body cells including skin. Therefore being kind to our mitochondria is likely to contribute to improved skin health, which in turn may have an anti-ageing effect.”

Nina Goad of the British Association of Dermatologists noted, “While the protection offered by lycopene is low, this research suggests that a diet containing high levels of antioxidant rich tomatoes could provide an extra tool in sun protection.”

Further the research team is aiming to commence a new longer-term study to analyze the positive effects of lycopene on the skin.