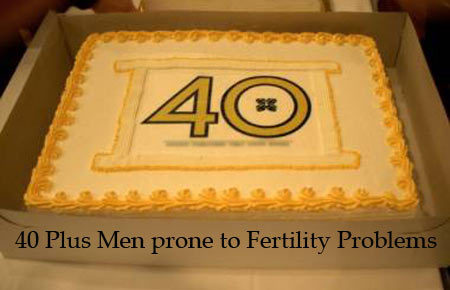 At the European Society Of Human Reproduction and Embryology Conference, a recent French research confirmed that it is not only older women having problems conceiving, but men past 40 are also susceptible to less fertility. In addition to the women’s age; the paternal factors will also have a strong impact in making conception difficult. Dr. Stephanie Belloc, a member of the Eylau Centre for Assisted Reproduction in France remarked “Our data gives evidence for the first time, for a strong paternal effect on IUI (intrauterine insemination) outcome either on pregnancy rates but also on miscarriage rates.”

The team at Eylau Centre for Assisted Reproduction analyzed 12,200 couples going through intrauterine inseminations (IUI) between January 2002 and December 2006. A less interfering technique than invitro fertilization, intrauterine insemination is provided to couples where the woman has no fertility ordeals. The method involves placing the sperms straightaway into the uterus after washing or spinning of the sperms in a centrifuge where they are separated from the seminal fluid. An account of miscarriages, pregnancy and birth was kept by close observation of all the couples during the entire pregnancy and fertility treatment. The couples were examined for size, shape, quantity and quality of sperms.

Researchers were astonished to find a similar result for both men and women. A higher risk of miscarriage was found in women above 35 and barely 10% of men post 40 would lead to a healthy pregnancy. The results were a decrease by 8.9 % in the rate of pregnancy for women over 35 years as compared to 14.5 percent in younger women. Surprisingly, men older than 45 years of age face a drop of 9.3 percent in pregnancy rate as compared to fathers 30 years or younger with a drop of 12.3 percent. Supposedly, age damages the DNA affecting the fertility in men .Also certain defects in the sperm lead to higher rates of miscarriages.

Thus, age, has a strong effect in determining the possibility of conceiving for both parents. Experts now strive towards counseling couples who plan to have a baby at an older age.