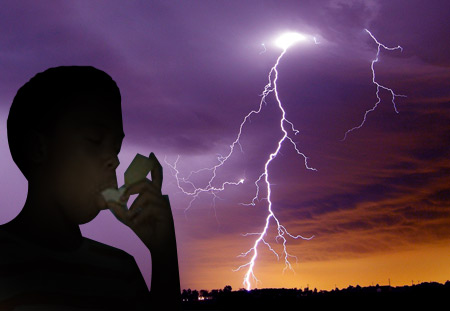 Till date thunderstorms and asthma attacks have never been linked in any of the studies. However in a study which apparently is the one of its kind in-depth study has found an association between the two.

The study conducted by the researchers at the University of Georgia and Emory University showed that the thunderstorms’ impact on asthma attack can be significant to public health.

A database that showed more than 10 million emergency room visits and in 41 hospitals in a 20-country area in and around Atlanta from the year 1993 to 2004 was studied upon. It was found that the cases of asthma attacks were three percent higher than what is normally recorded and that the cases increased especially in the days following thunderstorms.

It is for the first time that the climatologists and epidemiologists together have conducted a detailed study together.

“While a three percent increase in risk may seem modest, asthma is quite prevalent in Atlanta, and a modest relative increase could have a significant public health impact for a region with more than five million people,” said Andrew Grundstein, a climatologist in the department of geography at UGA and lead author on the research. Grundstein continued “three percent is likely conservative because of limitations in this study.”

This study is aimed at understanding “the mechanisms under the phenomenon of thunderstorm-induced asthma.” While it is difficult to imagine how thunderstorms can cause asthma attacks, the researchers explain that “pollen grains may rupture upon contact with rainwater, releasing respirable allergens, and that gusty winds from thunderstorm downdrafts spread particles…which may ultimately increase the risk of asthma attacks.”

“Obtaining a better understanding of the mechanistic basis of the phenomenon of thunderstorm-induced asthma will allow for better intervention strategies and improved emergencies services planning,” said Stefanie Ebelt Sarnat of Emory. “This will be particularly important in the era of climate change.”

According to the Academy of Allergy, Asthma and Immunology, there are about 20 million Americans suffering from asthma and the incidence of the condition has increased by 75 percent from 1980 and 1994. 5,000 asthma deaths are reported in America every year. Division of Public Health of the Georgia Department of Human Resources reports 210,000 under 17 Georgia children with asthma out of which around 65 percent of them have suffered from an asthma attack in 2007.

The detailed study was published in the online edition of Thorax, the medical journal.