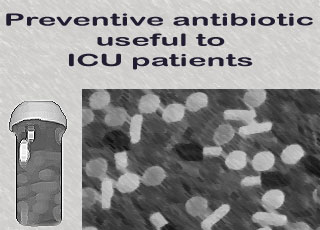 Evidently around 6,000 Dutch patients in various hospitals were studied. These ICU patients were divided into three groups by the researchers. Seemingly the effect of two kinds of antibiotic treatments, with standard ICU care were evaluated. Seemingly one group was given oral antibiotic paste four times a day. Second group, along with oral paste four times a day were also given antibiotics through a gastric tube in the intestinal tract and by intravenous dip. Third group was a control group and was given standard ICU care. In addition to being hospitalized in an ICU for maybe around three days, some of the patients were evidently presumed to be on a ventilator for at least two days.

The study authors presume that they have answered the questions raised against the debate on whether the advantages of antibiotic usage as preventive measures can balance the disadvantage of developing antibiotic resistance.

De Smet says that, “I believe we should revise the antibiotic policy for the ICU. Because the study was conducted in thirteen Dutch hospitals, the conclusions can be implemented throughout the country. We have seen that using antibiotics clearly results in a reduction in the number of deaths, and ICUs should make use of this knowledge.”

It’s apparently stated that annually around more than 18,000 patients are admitted in ICUs for more than three days, in Netherlands.

It’s stated that more in depth research will be required in order to deeply analyze the criterion. This study was apparently too short to analyze how resistance develops in the long term.