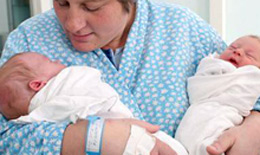 Researchers reported this Monday that women who have a male twin are less likely to marry and have children, perhaps because of being exposed to their brother’s testosterone for nine months in the womb.

A study of Finnish twins showed that women were 25 percent less likely to have children if their twin was a male. Those who did have children gave birth to an average of two fewer babies than women who had a twin sister.

Based on an analysis of 18th and 19th century data, researchers found women who had a male twin also were 15 percent less likely to get married, Virpi Lummaa of the University of Sheffield in Britain and Finland’s University of Turku and colleagues reported.

“We show that daughters born with a male co-twin have reduced lifetime reproductive success compared to those born with a female co-twin,” they wrote in their report, published in the Proceedings of the National Academy of Sciences.

“This reduction arises because such daughters have decreased probabilities of marrying as well as reduced fecundity.”

Researchers have long known that fetuses are influenced by hormones in the womb. Because male and female fetuses have similar levels of the “female” hormone estrogen, girl twins are more likely to be affected by testosterone in the womb.

Studies of rodents show that hormones in the womb affect a baby’s development, but researchers have lacked studies of actual populations to see if what is in theory possible biologically in fact happens in real life.

“The study used data from humans living in a pre-industrial era so as to obtain results that are not affected by advanced health care and contraception,” Lummaa said in a statement.

“Our results show that females who had a male cotwin have reduced fitness compared to those who had a female cotwin, but the success of males is unaffected by the sex of their cotwin,” the researcher wrote.

Perhaps the female twins had more masculine attitudes and behaviors that affected their decision to get married, the researchers speculated. Male features could have made the women less attractive to mates, they added.

Other studies have shown, for instance, that exposure to testosterone in the womb affects facial features and even finger lengths. Also, exposure to elevated levels of testosterone during development can promote diseases that compromise fertility, such as reproductive cancers, they said.