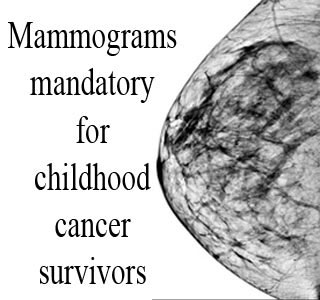 Women treated with chest radiation for childhood cancer are believed to be at a greater risk for the development of breast cancer at a young age. In spite of their increased risk, most of them don’t undergo the suggested mammogram screening, according to a latest study.

It is estimated that in the U.S., around 20,000 women of varying age are being treated with chest radiation for pediatric malignancy. Women, who have completed eight years following their initial radiation, where they were exposed to mild to heavy chest radiation dosage, are strongly recommended to undergo annual mammograms screenings.

A study was conducted on more than 600 women, aged 25 to 50 years. These women had been treated with chest radiation for pediatric malignancy, and were a part of a North-American long-term survivor group, the Childhood Cancer Survivor Study. The present study authors state that, “The risk of breast cancer begins to increase as early as 8 years after radiation and the median [midpoint] age of breast cancer diagnosis ranges from 32 to 35 years.”

Study author, Kevin C. Oeffinger, M.D., Memorial Sloan-Kettering Cancer Center, New York, and colleagues provided the study participants with a questionnaire. These participants were compared with other same aged pediatric cancer survivors who had not undergone chest radiation; and also with the siblings of the Childhood Cancer Survivor Study group.

The study author’s conclude that most of the young women, earlier treated with chest radiation for pediatric malignancy, in spite of being more vulnerable to develop breast cancer were very rarely being screened. The authors recommend clinicians and the cancer survivors themselves, to pay heed and do the needful to combat this criterion.

Their findings are published in Journal of the American Medical Association.