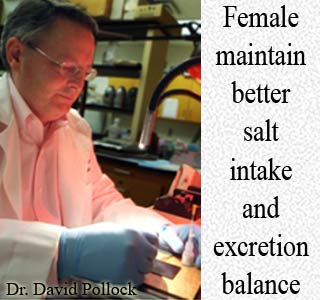 Medical College of Georgia researchers may have solved the mystery surrounding pre-menopausal women’s capability to maintain a healthy balance between the amount of salt consumed and excreted. These researchers say that pre-menopausal women don’t usually face hyper-tension problems initially. However after menopause they approximately face the same amount of risk as men.

Dr. David Pollock, renal physiologist, Vascular Biology Center at the Medical College of Georgia, and colleagues say that the credit for this added advantage of women may be linked with their hormones and a recently discovered function of a cell receptor.

The endothelin A (ETA) receptors were thought to be the evil opposite of endothelin B (ETB) receptors. The ETA receptors are perhaps responsible for the stimulation of nitric oxide production, salt excretion and blood vessel relaxation. Dr. Pollock says, “Normally the ETB receptor system is a decision maker about how much sodium to keep and how much to excrete.” It is stated that individual’s having ETB receptor problems are believed to be salt sensitive. Dr. Pollock says that, “We know from other studies we have done that this endothelin B receptor is critical to keeping you from becoming hypertensive when you eat salt.”

The researchers say that food provides the adequate amount of sodium needed by the body. Following which, a healthy kidney then flushes out the excess salt from the body in order to regulate a healthy balance between consumption and excretion. On the other hand, salt-sensitive hypertension occurs when the kidney stores an excess amount of salt in the body. On realizing that there is an increase in an individual’s blood pressure due to high amount of salt, the kidney tries to flush out the excess. If this process fails then the individual may suffer from stroke, heart attack, kidney failure, etc.

A test on rats without ETB receptors was conducted to evaluate these results. These rats received the endothelin protein, in order to verify if this protein would aid them in flushing out the excess salt. It was noticed that male rats didn’t react to it; however female rats reacted positively to it. It is stated that the kidney flushes out excess sodium without increasing the blood pressure in the female rats.

The researchers state that they plan to conduct more studies in order to gain a better perspective on the topic. Deeper analysis needs to be conducted on human subjects as well.

Their findings are published in the Hypertension issue.