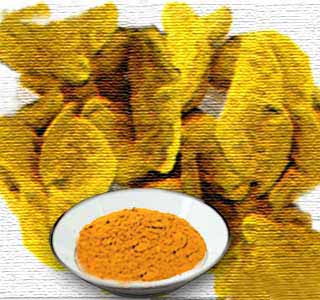 Turmeric has many magical qualities. Over the centuries it has been put to use for both cooking and medicinal purposes. However another advantage of turmeric has recently been uncovered, they seem to prevent weight gain! Curcumin, the key polyphenol in turmeric, seems to also aid in restraining the growth of fat tissue in animal models. This added advantage of turmeric was discovered by the investigators from the Jean Mayer USDA Human Nutrition Research Center on Aging at Tufts University (USDA HNRCA).

Curcumin is a type of phytochemical known as polyphenol, which is present in a huge amount in turmeric. Reports were believed to have suggested that phytochemicals which are even found in plants seem to aid against diseases. Curcumin being the bioactive component of turmeric seemingly gets easily absorbed by the body.

The findings of this study have suggested that turmeric seems to reduce weight gain in animal models. If indeed these findings may hold potential then it could prove to be very beneficial. However these experts are not yet certain if these findings may be akin in human subjects as well.

Senior author, Mohsen Meydani, DVM, PhD, director of the Vascular Biology Laboratory, USDA HNRCA, says that, “Weight gain is the result of the growth and expansion of fat tissue, which cannot happen unless new blood vessels form, a process known as angiogenesis. Based on our data, curcumin appears to suppress angiogenic activity in the fat tissue of mice fed high fat diets.”

Meydani explains that, “Curcumin appeared to be responsible for total lower body fat in the group that received supplementation. In those mice, we observed a suppression of microvessel density in fat tissue, a sign of less blood vessel growth and thus less expansion of fat. We also found lower blood cholesterol levels and fat in the liver of those mice. In general, angiogenesis and an accumulation of lipids in fat cells contribute to fat tissue growth.”

It was even noted that curcumin may interrupt two gene expressions, which seemingly played a role in the angiogenesis progression in both cell and mice. However these investigators are not certain if curcumin may have the same effect on human subjects as well.

This report has been presented in The Journal of Nutrition.