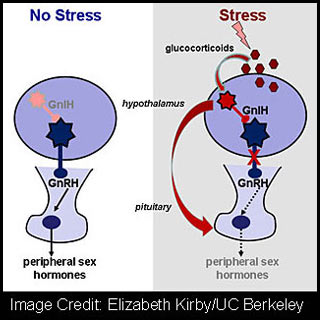 There have been numerous speculations about how stress may be linked with infertility and sexual dysfunction. Now a team of researchers are believed to have acquired the last clue and solved the mystery revolving around this link. This mystery is believed to have been solved by the researchers from the University of California, Berkeley.

It was previously known that stress may increase the level of glucocorticoid stress hormones like cortisol. This may in turn prevent the main sex hormone of the body (gonadotropin) from emitting the GnRH hormone, which may further restrain the count of sperm, ovulation and sexual activity.

The newly conducted research is believed to have revealed that stress may also accelerate the brain levels of the reproductive hormone, gonadotropin-inhibitory hormone (GnIH). This small protein hormone, called the RFamide-related peptide (RFRP), apparently inhibits GnRH and thereby stops reproduction.

“We know stress affects the top-tier reproductive hormone, GnRH, but we show, in fact, that stress also affects another high-level hormone, GnIH, to cause reproductive dysfunction. This work provides a new target for researchers, a new way to think about infertility and dysfunction. The more we know, the more we can look for ways to treat it,” says lead researcher, Elizabeth Kirby, a graduate student at UC Berkeley’s Helen Wills Neuroscience Institute.

The researchers have evidently reached their conclusion through the experiments conducted on rats and the effects of the hormones on birds. They hypothesize that if these hormones have the same effect on all mammals then they could be of great help in altering the way physicians perceive human reproductive issues.

George Bentley, UC Berkeley assistant professor of integrative biology, says that, “There is a growing body of work that points to GnIH as being a big player in the inhibition of reproduction in mammals. We didn’t have any hint of this stress effect nine years ago, when GnIH was first discovered.”

He further also states that, “Critically, we show that RFRP neurons express the receptors for glucocorticoids, which are released from the adrenal glands in response to stress, and that removal of the adrenal glands prevents the stress-induced, up-regulation of RFRP. Thus, we believe we have identified an entirely novel pathway for stress-induced reproductive dysfunction.”

It was observed that removing the gland may not be possible because the adrenal hormone is stated to be essential for survival. Therefore it is believed that glucocorticoids may not be an effective way of tackling with chronic stress. Having said this, it was also noted that inhibiting GnIH may aid in lowering the effect of stress on reproduction. The researchers hope to further analyze their findings through a deeper analysis.

This research is believed to have been published online in the Proceedings of the National Academy of Sciences journal.