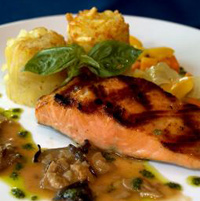 The benefits of fish generally outweigh any risks from potentially high levels of mercury and other contaminants in some species. In fact, a few fish species like shark, swordfish, king mackerel and tilefish have been found to have high levels of Methylmercury.

High intakes of Methylmercury have been linked to learning disabilities and developmental delays in children. Besides, women who are pregnant or who are likely to become pregnant as well as children under 12 have been seriously advised to avoid the above mentioned species of fish. As reported previously, mercury compounds found in fish could also damage pancreatic cells.

On Tuesday, the Institute of Medicine said that eating seafood at least twice a week is actually good for one’s heart, and generally outweighs the risk of exposure to mercury and other dangerous contaminants.

The findings from the Institute, which advises the government on health policy, are in line with widely accepted government advice that eating fish and shellfish may reduce people’s risk of developing heart disease, the leading cause of death in the United States.

Researchers are yet unclear how eating fish fights heart disease. It might just be that the omega-3 fatty acids offer some protection, or maybe since people eat less saturated fat and cholesterol when they choose to eat sea food which is leaner than fatty meats.

To conclude this confusing issue of whether to eat or not to eat seafood, all we can say is that eating fish does benefit the heart as well as the rest of the body, but what should be kept in mind is the species of fish that are too be avoided, due to their high levels of mercury.