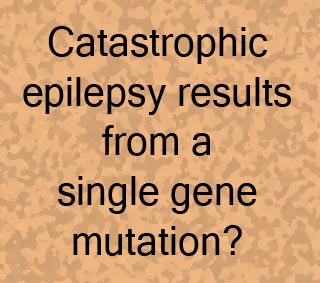 Researchers were believed to have found that an alteration in a single gene could be responsible for catastrophic epilepsy. Apparently, this epilepsy is characterized with muscle spasms, persistent seizures, mental retardation and sometimes with autism. This novel research was led by researchers from the Baylor College of Medicine.

Professor of neurology, neuroscience and molecular and human genetics and director of the Blue Bird Circle Developmental Neurogenetics Laboratory at BCM, Dr. Jeffrey Noebels stated that the BCM department of neurology group replicated the deficiency in mice by developing a mouse model of the disease. They did this so that it could aid them in finding out useful treatments and novel ways to cure the disease. Dr. James Frost, professor of neurology at BCM seemed to have developed the model of the special mouse.

“While many genes underlying various forms of childhood epilepsy have been identified in the past decade, most cause a disorder of ‘pure’ seizures,” says Noebels. Why some children have a more complicated set of disorders beginning with major motor spasms in infancy followed by cognitive dysfunction and developmental disorders such as autism remained a mystery until the discovery by the BCM team that a mutation in only a single gene explains all four features of catastrophic epilepsy.

It was noted that a gene identified as Aristaless-related homeobox or ARX had a particular mutation called a triplet repeat. Apparently, this triplet repeat denoted that a particular genetic was repeated many times in the gene. For the purpose of the research, experts were believed to have duplicated this particular mutation in a specific type of mice. They observed that mice seem to have motor spasm similar to those observed in human infants.

Recordings of their brain waves were believed to have revealed various kinds of seizes, including absence epilepsy and universal fits. In addition, it was seen that they had learning disabilities and high possibilities of avoiding contact with other mice in contrast to their normal counterparts. Allegedly, this behavior, is similar to that seen in children with autism or similar disorders in the same field. Noebels further stated that the novel model is an essential tool in order to find a cure for the disorder.

Lead author of the report and an instructor in neurology at BCM, Dr. Maureen Price says that, “Mutation of the ARX gene was previously known to affect interneurons, a class of cells that inhibit electrical activity in the brain.”

As soon as the brains of the adult mice with the mutated gene were assessed, researchers seemed to have found that a special group of interneurons had never developed in particular brain regions.

“Further study will allow use to pinpoint which brain region is liked to the autistic-like behavior,” added Price.
“At present there is no proven cure to offer children with this specific epilepsy. We now have new clues into the mechanism and have already initiated studies with a new class of drugs not previously explored for this disorder.” elucidates Noebels.

Jong W. Yoo, Daniel L. Burgess and Fang Deng, all of BCM are some other researchers who have worked on this research. The work was funded by Peter Kellaway Memorial Research Fund, the Blue Bird Circle Foundation, the National Institutes of Health Intellectual and Developmental Disabilities Research Center, and the PACE Foundation.

This work has been published in the Journal of Neuroscience.