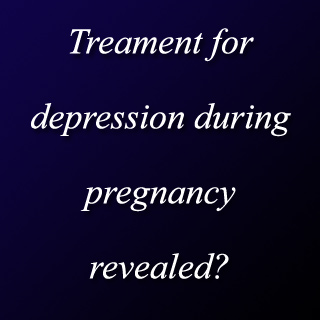 Pregnant women undergoing depression seem to face complicated treatment decisions because of the risks associated with both untreated depression and the use of antidepressants. A novel report from The American College of Obstetricians and Gynecologists (ACOG) and the American Psychiatric Association (APA) is believed to attempt in assisting doctors and patients weigh the risks and benefits of various treatment options.

Depression is known to be common during pregnancy. Approximately 14 to 23 percent of pregnant women may perhaps experience depressive symptoms while pregnant. It was estimated that during the year 2003, nearly 13 percent of women consumed an antidepressant at some time during their pregnancy.

“Depression in pregnant women often goes unrecognized and untreated in part because of concerns about the safety of treating women during pregnancy. It is our hope that this will be a resource to clinicians who care for pregnant women who have or are at risk of developing major depressive disorder,” says lead researcher Kimberly Ann Yonkers, MD, Yale University associate professor of psychiatry and obstetrics, gynecology and reproductive sciences.

Apparently, symptoms of depression as well as the use of antidepressant medications during pregnancy have been associated with negative consequences for the newborn.

In addition, infants born to women with depression seem to have high risk for irritability, less activity and attentiveness, and fewer facial expressions in contrast to those born to mothers without depression.

Depression and its symptoms are also noted to have been associated with fetal growth change and shorter gestation periods. Though presented research still leaves some questions unanswered, some studies appear to have linked fetal malformations, cardiac defects, pulmonary hypertension, and reduced birth weight to antidepressant use during pregnancy.

Identifying depression in pregnant women may perhaps be difficult because its symptoms imitate those linked to pregnancy. Symptoms such as changes in mood, energy level, appetite, and cognition are believed to have been seen during pregnancy as well are symptoms for depression.

Allegedly, depressed women are more susceptible to have poor prenatal care and pregnancy complications, such as nausea, vomiting, and preeclampsia, and making use of drugs, alcohol, and nicotine.

APA and ACOG were observed to have organized a work group in order to critically evaluate and summarize information about the risks associated with depression and antidepressant treatment during pregnancy. The group seems to have comprised of these two medical specialties along with clinical research experts and a developmental pediatrician.

For the purpose of the research, they evaluated collective existing research which was related to antidepressant use in pregnancy. However, this present research has not yet sufficiently controlled for other factors that could possibly influence birth outcomes. Apparently, the factors which influence birth outcomes include maternal illness or problematic health behaviors which could adversely affect pregnancy.

According to this report, some patients with mild-to-moderate depression may perhaps be treated with psychotherapy. They could also be treated individually or in group along with medicines. Furthermore, the report seems to have discussed the need for constant consultation between a patient’s ob-gyn and psychiatrist during pregnancy. They were believed to have presented algorithms for treating patients in familiar situations.

For women on who are on medicine with mild or no symptoms for six months or longer, it may perhaps be suitable to decrease and discontinue medicine before becoming pregnant. However, discontinuation of medicine may not be appropriate in women with a history of severe, recurrent depression. In addition, women who seemed to have experienced from psychosis, bipolar disorder, other psychiatric illness, as well as a history of suicide attempts which requires medicine.

Psychiatrically stable pregnant women who choose to stay on pills may be able to do so only after consultation between their psychiatrist and ob-gyn in order to discuss risks and benefits. Further, pregnant women who would like to discontinue medication may attempt in decreasing the dosage of medicine or perhaps discontinue if they do not experience symptoms, depending on their psychiatric history.

It was observed that expecting mothers with a history of recurrent depression are at an increased risk of relapse if they discontinue their medicines. Also, expectant women with recurrent depression or who undergo depressive symptoms despite their pills may possibly benefit from psychotherapy in order to replace or augment medication.

However, pregnant women with severe depression where there have been cases of suicide attempts, functional incapacitation, or weight loss should continue medicines. If they decline the medicines, alternative treatment and monitoring should be ready, preferably before discontinuation.

Evidently, pregnant women who are currently not on medicines and prefer to avoid antidepressant medicine should perhaps go for psychotherapy, as this may prove beneficial. Besides, expectant women who prefer consuming pills should carefully evaluate and discuss the risks and benefits of treatment choices. They might also assess and discuss factors such as stage of gestation, symptoms, history of depression, and other conditions and circumstances. For instance, smoking may make it difficult in gaining weight. Lastly, regardless of circumstances, a woman with suicidal or psychotic symptoms should immediately see a psychiatrist for treatment.

This available research was noted to have few drawbacks. The drawbacks in this research were that there seemed to be few studies of antidepressants and birth outcomes which assessed the mothers’ psychiatric condition.

Mystifying factors which influence birth outcomes i.e. poor prenatal care and the use of drug or alcohol or nicotine were usually not controlled. Also pregnancy complications such as, nausea, preeclampsia seemed to have occurred at a higher rate in depressed women in contrast to non-depressed women.

Based on an extensive review of existing research, ACOG and APA seem to present recommendations for the treatment of women with depression during pregnancy. The report was known as, ‘The Management of Depression during Pregnancy: A Report from the American Psychiatric Association and The American College of Obstetricians and Gynecologists.’

This report will be published in Obstetrics & Gynecology in September 2009 and General Hospital Psychiatry by September/October 2009.